Trump's Most Gobsmacking Press Briefing Moments During The Coronavirus Outbreak

The UK government’s daily press conference features three figures standing behind a lectern giving a sober update on the current state of the coronavirus outbreak.

By contrast, the US federal government’s daily briefly is dominated by a thin-skinned Donald Trump, who sometimes stretches self-congratulation and grievance over more than two hours while adopting a cavalier approach to the truth.

You could be mistaken for thinking America did not have the largest number Covid-19 cases in the world given how he appears to care more about the ratings than delivering a coherent message.

Here’s a compilation of the most jaw-dropping moments from his White House performances. It’s worth noting the US death toll has risen to 50,243.

Perhaps the most unhinged performance came when the US president launched a full-throated propaganda campaign and attempted to rewrite history on his pandemic response.

He criticised the news media, and specifically The New York Times, for accurately reporting that he was slow to effectively respond to the growing pandemic despite being warned early on by several aides and health experts about the need for aggressive action.

So far, so normal. But Trump then surprised reporters by having the briefing room’s lights dimmed to show a video that began with a slide titled: “The Media Minimized the Risk From the Start.” To put it charitably, he has changed his tune.

Trump, Feb. 28: “The press is in hysteria mode” over coronavirus.

Trump April 13: “The media minimized the risk from the start.”

The propaganda video showed several newsreels of reporters and TV hosts downplaying the virus’s risk in January and early February. The video then showed a timeline of the White House’s response to the pandemic, with Trump’s first action being on January 31, when he announced travel restrictions on passengers from China.

As Trump continued his tirade, US news networks including MSNBC and CNN made the decision to cut away ― but not before providing viewers with a slew of headlines (or chyrons as they are referred to in the US) accurately depicting the situation in the briefing room.

Four banners on @CNN over the last five minutes … pic.twitter.com/UBxpCcY2vl

What a time to be alive and a chyron writer pic.twitter.com/LiXTuZPWHy

“You know you’re a fake. You know that.”

At the same press conference, Paula Reid, of CBS, challenged Trump over what he did to help prevent the pandemic in the month between announcing travel restrictions from China and announcing that pharmaceutical companies were beginning to develop a vaccine.

“Right now, literally 20 million people are unemployed. Tens of thousands of Americans are dead. How does this reel or this rant supposed to make people feel confident in an unprecedented crisis?”

Here’s video of @PaulaReidCBS grilling Trump on what his administration did in the month leading up to the coronavirus crisis.

“Your video has a complete gap,” Reid continued, referring to the video’s timeline jump from February 6 to March 2. “What did your administration do in February with the time that your travel ban bought you?”

Trump responded by saying: “A lot.”

Reid continued her questioning despite the president shouting over her, asking him what he did with the entire month he had to implement mitigation measures.

“You know you’re a fake. You know that,” Trump told Reid, as a pattern begun to emerge of the president attacking female White House reporters.

“I was never involved in a model … at least this kind of a model.”

Despite being in the middle of a pandemic, Trump found time to crack a joke about being “involved” with models.

Trump was commenting on the number of people who would die from Covid-19 when he said: “The models show hundreds of thousands of people are going to die and you know what I want to do? I want to come way under the model. The professionals did the models and I was never involved in a model. At least this kind of a model.”

Trump: “The models show hundreds of thousands of people are going to die. And you know what I want to do? I want to come way under the model. The professionals did the models and I was never involved in a model … at least this kind of a model.” Stopped short of wink to camera pic.twitter.com/ywwzA4yRvM

Trump has faced repeated accusations of racism as he has chosen to spend more time than most world leaders on blaming China for the outbreak.

In the most striking example of this, a photograph captured a Trump news conference script showing what appeared to be his own handwritten change from “corona” to “Chinese” to form “Chinese virus.”

Washington Post photographer Jabin Botsford posted the close-up on Twitter amid criticism of Trump over his insistence this week on incorrectly calling coronavirus the “Chinese virus”.

Critics have slammed the implied racism of his tactic, which they say is aimed at blaming a nation and a race of people for the pandemic to distract the American public from the dangerous failings of his own administration to battle the virus. 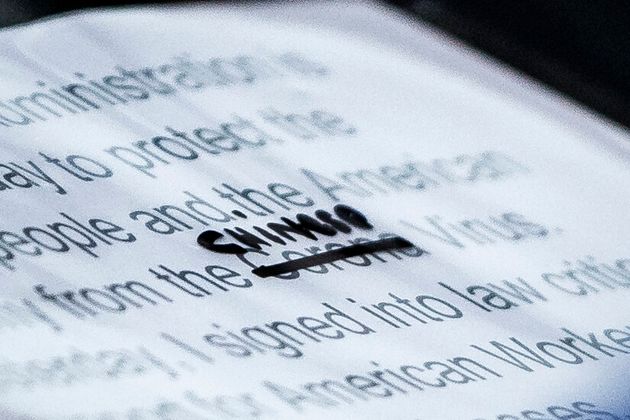 Trump has dismissed the idea that the term “Chinese virus” is in any way racist. “It comes from China,” he said. “It’s not racist at all. I want to be accurate.”

However, Trump’s own top health advisers have said it is inappropriate and inaccurate to label the novel coronavirus as such.

Questionable opinions on China are a recurring theme.

On March 23, his eldest son, Donald Trump Jr, shared a Karate Kid-themed meme of his father beating the coronavirus on Instagram with the caption: “Hahahahaha ‘The Kung-Flu Kid.’”

The term “kung flu” gained traction last week after CBS alleged that a White House staffer had used it to describe the coronavirus.

When asked about the term at a press conference, Trump senior insisted that calling the coronavirus the “kung flu” was neither wrong nor racist.

“I wonder who said that (kung flu) …. I think they probably would agree with it 100%. It comes from China,” Trump mused. “There’s nothing not to agree with.”

Even by the normal standards of politicians evading questions, Trump has gone further than most.

The president spent a portion of one briefing attacking White House reporters who asked questions about his recent remarks about the crisis.

Rather than suggest he didn’t agree with the premise of the question, or that he couldn’t recall what he had said, Trump flatly denied saying the words.

PBS NewsHour’s Yamiche Alcindor began her question by directly quoting Trump from a recent interview with Fox News host Sean Hannity, in which the president said he does not believe New York needs all the ventilators that governor Andrew Cuomo said they did.

“And you know a lot ― a lot of equipment’s being asked for that I don’t think they’ll need but I’m building,” Trump told Hannity, according to the transcript.

“You know, we’re building four hospitals, four medical centers and many other things we’ve developed and sent thousands of ― thousands of ventilators.”

Here is the transcript of the portion from Fox News where Trump did say what he just told @Yamiche
he didn’t say.
Q: The first is you said repeatedly that you think some of the equipment that governors are requesting, they don’t actually need. You said — Trump: I didn’t say it pic.twitter.com/cvVw5lbvYl

When Alcindor asked Trump how that thinking will impact how he fills equipment orders, he replied: “I didn’t say it.”

Why don’t “you people” act “a little more positive?” Trump told Alcindor as she continued to try and finish her question.

“I want them to be appreciative”

After slamming the governors of Washington and Michigan, he was asked what more he wants from them, Trump answered: “I want them to be appreciative.”

Referring to his vice president Mike Pence, he went on: “I say, ‘Mike, don’t call the governor of Washington; you’re wasting your time with him. Don’t call the woman in Michigan. It doesn’t make any difference what happens.’”

“If they don’t treat you right, I don’t call,” Trump added, noting Pence is a “different type of person” who will “call quietly anyway.”

Naturally, he later denied saying this.

“Your statement is a lie” — Trump attacks a CNN reporter for asking him to explain his direct quotes from Friday about how he wants Democratic governors to be more “appreciative” pic.twitter.com/uv6fowVLZw

Trump has proved himself to be sensitive in the briefings since the very beginning of the crisis.

When given a softball question, an opportunity to express a heartfelt message the country, the president opted to call the inquiry “nasty” and tell the reporter he should be “ashamed”.

NBC’s Peter Alexander asked the president: “What do you say to Americans who are watching you right now who are scared?”

He responded: “I say that you are a terrible reporter, that’s what I say. It’s a very nasty question. It’s a very bad signal that you’re putting out to the American people.

“The American people are looking for answers and looking for hope. You’re doing sensationalism.”

NBC’s @PeterAlexander asks Trump what he’d say to Americans who are frightened.

Trump goes on rant against Alexander, says he asked a “nasty question,” calls him a “terrible reporter” and attacks NBC and Comcast. pic.twitter.com/vZAk3M4mqR

He then criticiced NBC, telling Alexander: “You ought to be ashamed of yourself.”

It was not the last “nasty” question.

This month Trump lashed out at a reporter when she challenged him about the shutdown of a pandemic response unit within the National Security Council in 2018.

He was asked to reconcile the elimination of the pandemic team with his insistence that he takes no responsibility for a critical dearth of testing in the US fight against coronavirus. The reporter noted that officials who had worked in the unit said the White House “lost valuable time” without it.

“Keep your voice down.”

In keeping with his habit of targetting women, Trump patronised CBS’s Weijia Jiang during last Sunday’s press briefing when she asked why he did not do more to prepare for the pandemic in February when he was holding large political rallies.

“Who are you with? … nice and easy. Just relax … keep your voice down, please. Keep your voice down” — Trump tries to bully @weijia after she asks him a question about his statements downplaying the virus in February and his decisions to hold rallies that month pic.twitter.com/SCicdLN8Hv

“Why did you wait so long to warn them, and why did you not have social distancing until March 16?” she asked him.

“So if you look at what I did in terms of cutting off or banning China from coming in,” he began.

“Chinese nationals … not Americans who were also coming from China,” she specified.

He added: “We cut it off. People were amazed, these gentlemen, everybody was amazed that I did it.”

He went on to tell her to “keep your voice down” when she asked if he thought the virus, having been in the US before February, would spread.