My Baby's Intestines Fell Out. Here's What I Wish I Had Known

My youngest son doesn’t have a belly button. Instead, there’s a line down his abdomen and a clump of scar tissue strategically made to look like a traditional navel. Bastian was born with gastroschisis, a birth defect involving a hole near his umbilical cord that allowed his intestines to spill out of his body and into the amniotic fluid. If it sounds terrifying, that’s because it is. But this is a story of triumph, not tragedy.

While the condition is rare, gastroschisis is becoming increasingly common, and no one knows why. Researchers say the number of cases in America has more than doubled since 1995, and many people speculate that environmental factors are to blame.

Even though we found out about the gastroschisis early on in my pregnancy (it’s usually discovered in the second trimester via ultrasound), nothing prepared me for the sight of my own child hooked up to numerous tubes and wires, with some of his internal organs displayed in a plastic bag outside of his tiny body.

We’d met with surgeons in advance, had toured the NICU, and had been told what to expect during his procedures. Somehow, what that might actually look like didn’t compute.

I’d thought I was mentally and emotionally prepared, but I was naive. There’s so much I wish I would’ve known before I took on the scariest role of my life.

Every case is different. Sometimes there’s just a tiny bit of bowel bulging out; sometimes it’s all the intestines plus additional organs that have fallen out. Sometimes a baby can have her intestines returned and the tear closed up in a single procedure.

Other times, as with Bastian, the surgeons can’t replace the bowels all at once without putting too much pressure on the lungs, so a plastic bag called a silo is placed over the intestines and stapled to the baby’s skin. Over time, (it took about a week for Bastian), gravity pulls the organs back in.

The doctor helped the process along by putting pressure at the top of the silo, squeezing a little bit of his intestines back into his body like it was nothing more than a tube of toothpaste. I’m the person who covers her eyes during a gory movie scene, but I forced myself to watch everything my son was enduring.

Bastian had to withstand more in the first few weeks of his existence than most people go through in a lifetime. Initially, the surgeon believed she could get all the intestines back in the first time around. When that didn’t happen, she thought it would only take a few days before she could do the second procedure. But then Bastian’s skin turned angry and red, becoming so swollen I thought it was going to split open in some places. (In addition to the fact that he was already split wide open down the middle.)

His second procedure had to be postponed for fear that the hole wouldn’t fully close, and that even if it did, the stitches would be pulled back apart. There was nothing they could do during this time but flush out his body and wait for it to start healing itself. At this stage, the opening in his abdomen was about the size of a fat orange. 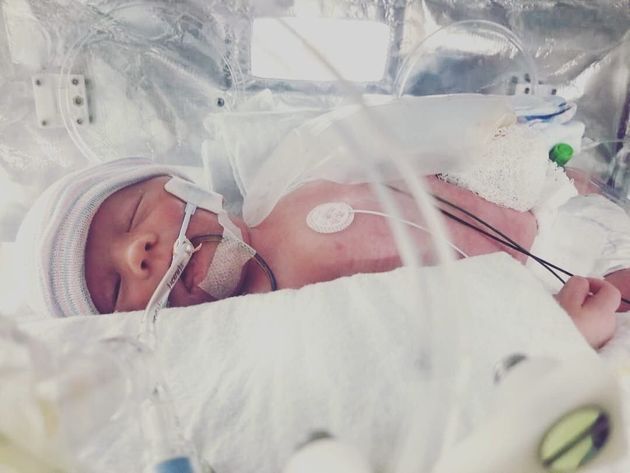 I knew there would be surgeries to correct the birth defect, but since he was born at 37 weeks and not technically premature, I didn’t know there would be so many other medical things done to him along the way. There was the special bed with a lid that had to stay closed in order to regulate his body temperature. There were the constant needle pricks on his tiny feet and the IV that had to repeatedly be replaced, because even sedated, he’d tug it out.

There was the nasogastric tube that removed the nasty green bile from his stomach since he couldn’t yet use his intestines. And there was the breathing tube crammed down his throat that kept him from even being able to cry out in his distress.

Have you ever seen a baby who is wailing with all of his might but not making a sound? His face all red and scrunched up, his mouth wide open with lips trembling, but completely, eerily silent? It’ll break your heart.

Bastian’s nutrition came from a PICC line linked to his heart, a device with potentially fatal risks such as infection and blood clots. At one point a nurse tried to reassure me by saying, “Don’t worry, the complications from a PICC line are rare.”

I remember thinking, “So is gastroschisis, but here we are.”

Have you ever seen a baby who is wailing with all of his might but not making a sound? His face all red and scrunched up, his mouth wide open with lips trembling, but completely, eerily silent? It’ll break your heart.

I wish someone could have prepared me for how much anger I’d feel. I expected the sadness and the fear, but the fury was an unpleasant surprise. I wanted to rip out all the tubes, snatch my baby out of that sterile plastic box, and make a run for it. Obviously, that would only make everything worse, so I was stuck helplessly watching, my rage growing at warp speed.

I also felt guilty. Something as simple as eating a pack of Goldfish crackers while pumping breastmilk would reduce me to tears the moment I remembered my son wasn’t allowed to eat yet. And no matter how exhausted I was, I’d struggle to sleep, the guilt of leaving him at the hospital gnawing at me.

After Bastian finally received his second surgery to close the hole, we weren’t done. We had to wait for his intestine to “wake up.” Because they were unprotected in the amniotic fluid for so long, his bowels could be damaged or tangled. There are cases when the doctors can’t save them, so sections —sometimes large sections ― have to be cut out entirely.

The real test was could he poop? Never in my life did I expect to be so eager, so desperate for a dirty diaper. The night it finally happened, my husband and I literally jumped around, squealing with joy. We were way too loud for the gentle atmosphere of a NICU, but the nurses were kind about it and even celebrated with us.

Maybe most surprisingly of all, I had no idea how hard it would be to bring him home. As much as I hated the NICU, I’d come to rely on the security of the machines and the medical staff being readily available. Though Bastian is the youngest of three, I felt like a brand-new mom, completely intimidated and ill-equipped to take care of a newborn.

Eleven months later, we’ve both made a lot of progress. There have been some hiccups ― a trip to the ER to drain fluid off his surgery site, and another procedure when he was around nine months old that required general anaesthesia and gave me intense flashbacks. But right now, as I type this, he is snuggled against me, milk-drunk and falling asleep. It’s his favourite place to be, and while it can be incredibly inconvenient at times, I can’t really blame him. Sometimes I think he’s still making up for lost time, for those days when he had to rely on a morphine drip for comfort instead of his mother’s arms.

We are about to celebrate Bastian’s first birthday, and it’s hard to believe that much time has passed. I look at this playful, charming, beautiful little human I helped create, and while I would’ve never wished that kind of trauma on him, I know he was worth everything I had to endure. He didn’t have a normal arrival, but he fought to be here, and I’m so deeply grateful for the pure strength he has.

My son doesn’t have a belly button, but that’s okay. Every warrior has a few scars.

This article
I’ve Started Dating Someone While In Self-Isolation. Here’s How It’s Going