I Thought I Totally Understood Gender And Sexuality. Then My Son Asked For Pink Shoes

When my son was three, I made a mistake.

We were at a shoe store in New York City, picking out new sneakers for his rapidly growing tiny feet. He was insistent: The next pair of shoes he was going to wear had to be bright pink. I steered him toward red. He pressed for pink, ignoring the usual varieties of blue for little boys. I am ashamed to admit that I eventually lied and told him that pink wasn’t available in his size. We compromised on orange.

On the subway ride home, I couldn’t help but wonder what guided me to do what I had just done. Does the boundless love that I feel for my son depend on who he is or whom he likes – and is any of that dependent upon or determined by what colour shoes he wants? The answer to all of those questions was a resounding “No, of course not!”

On that same subway ride, he told me that he wanted pink sneakers so that girls would come up to him and say, “Wow! Cool sneakers,” and so he could have even more friends.

Still, the figurative train – my train of thought – had left the station. How much did I really know about gender?

I took sex education in high school in the 90s, and we were taught that a person can be male or female or, in some cases, ‘transsexual’, and that sexual orientation is limited to gay, straight or bisexual. There were no other possibilities. There were no other options. But things had changed and with those changes, I wondered: Was it time to update what I thought I knew about the world? It seemed so.

The unlikely source to aid me in my quest for new knowledge – my Yoda, if you will – was a 12-year-old friend. (Not that I befriend preteens, mind you – she happens to be the daughter of my friends, but our relationship is a true friendship that stands on its own.) As she got closer to becoming a teenager, she began casually dropping words like ‘nonbinary’ and ‘demisexual’ and ‘intersex’ and ‘fluid’ into our conversations. I quietly Googled for them. I suddenly realised that these words have been around for some time – outside of my very small world – and that I did not know them because I had never heard them (or I never knew that I was hearing them).

I also learned that gender and sexual orientation exist on a continuum. There are many, many different genders – not just “male” or “female” – and some people feel they were assigned the wrong gender at birth and others feel they are both genders or neither gender. The same goes for sexual orientation: There are all kinds of ways of being, from heterosexual to homosexual to bisexual to pansexual to asexual ― and everything in between. What’s more, just because you like something that’s associated with one gender doesn’t mean that you are that gender or want to identify as that gender, and it certainly doesn’t mean anything about your sexual orientation. Basically, I learned there are so many more ways to be in the world than I was ever taught or ever knew. 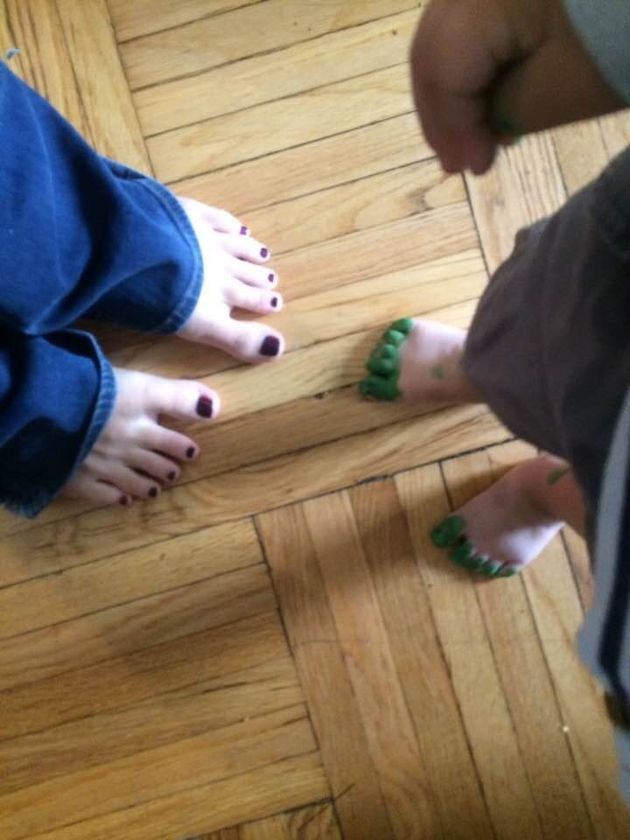 After that, I never said no to pink again. I bought the pink bedding my son and I both liked and the pink sunglasses he asked for and the pink toys he picked out. He loved his toy kitchen but couldn’t care less for the baby doll he was given.

It was our own little revolution, and pink was for everyone. Later that year, my son asked me, “Mama, pink is not just for girls, right?”

“Of course not,” I reassured him, disappointed that even though I have changed, the world had yet to catch up.

The following year, my son saw a drag queen on the subway. His jaw dropped, his eyes bulged and he just could not stop staring, making the queen ― and everyone in that train car, me especially ― extremely nervous. He asked me about what he was seeing, and this time, I was able to explain, as one can to a little kid, about all the different kinds of people who exist in the world.

“But… a boy or a girl?” my son insisted. So much for trying to keep up with the times, I thought, frozen, terrified of offending another human.

“Well, actually, both,” the drag queen replied with a smile. I looked at them with all the gratitude in the world for not taking offence at the question.

My son analysed this quietly. It felt like an A train car had never been this quiet before.

“That’s so cool!” my son finally concluded and went about his business ― which was announcing the next stop. The other passengers sighed with relief. The passenger who was briefly the centre of everyone’s attention smirked. My son smiled at his new friend.

But then, it got worse. My son entered preschool in our new home in Barcelona, Spain, and suddenly there were things girls do and things boys do. Girls dance, and boys play soccer ― or at least that’s what we were being told and shown. I took him to a ballet class where he was the only boy, and he took two days to make the decision of whether he wanted to keep going. No, he told me, because ballet is for girls. No number of Alvin Ailey or Fred Astaire videos, although agreeably cool, could convince him otherwise. Another mom at the school told me that her daughter had dropped soccer for the same reason ― it was for boys, she said.

Now it was no longer me, but the other influences in his life ― his classmates, teachers, the images he saw around us ― that told him you’re either A or B, girl or boy, and you’re expected to behave accordingly. Despite my attempts to keep the gender stereotypes out of his life, at age five, he clearly drew a line in his head: On one side were the boys, and on the other, the girls.

While I can’t control everything that influences my son ― be it society, school or advertising ― I know that I must do my best so that his world is inclusive of everyone who lives in it and so he grows up to be whomever he feels he truly is inside.

Aside from continuing to talk to my son and challenge stereotypes whenever we encounter them, I plan to take whatever steps I can to counteract the limiting and potentially damaging messages our culture broadcasts to him ― and all of us. For instance, on the holiday of Sant Jordi, the local equivalent of Valentine’s Day, boys give girls roses and girls give boys books. (As a side note, I think the exchange is extremely unfair. I would much prefer a book!) This year, I plan to give him both a rose and a book. Next year, I hope that he can choose on his own ― hopefully based on what he wants, not based on what he’s told by others.

I have much to learn. I am trying to do better because I want my son to grow up in a new reality, without the much-outdated “pink is for girls” and “boys don’t cry” mentality. Children don’t follow or really have much use for stereotypes – unless we instil them in them. They accept what they see and hear unless we challenge or champion it – like challenging the idea that boys don’t do ballet or championing a drag queen on a subway. And while I can’t control everything that influences my son – be it society, school or advertising – I know that I must do my best so that his world is inclusive of everyone who lives in it and so he grows up to be whomever he feels he truly is inside.

Since the day my son was born, I have wanted two things: for him to be a good person, and for him to be happy. I am adding a third: to be unapologetically, unequivocally him. In pink sneakers or not.

Have a compelling personal story you want to tell?
Lockdown Is Brutal For Single Parents. But We Have No Choice But To Get Used To It