Meet The Couples Having Zoom Weddings During A Global Pandemic

We’re here to guide you through the coronavirus lockdown.
Lockdown Is Bringing Us Closer To The People We Love – Even When We’re Miles Apart

“Since most of our wedding party couldn’t come we delivered them care packages that included a meal from our caterer, cupcakes, hand sanitiser, home-made masks and toilet paper,” says Mallory.

The couple had some reservations about how they would entertain their in-person guests as well as those watching remotely, but say the day ran surprisingly smoothly.

“The wedding was so much fun,” says Mallory. “It was intimate, deeply personal and we made sure it still had the trappings of a traditional wedding with a picnic-style dinner, flowers, cupcakes and Champagne.” 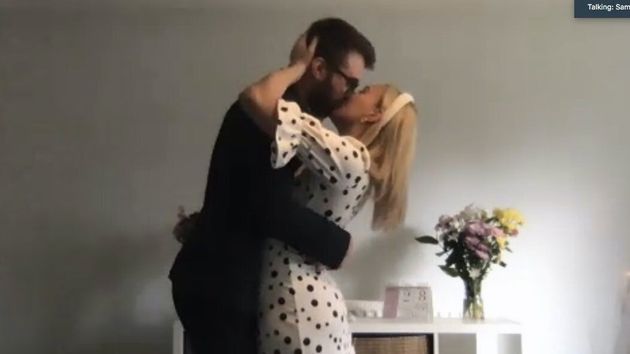 Sophie Austin and Ben Jackson decided to get married from their one bedroom flat in Croydon, London on 28 March when their planned ceremony could no longer go ahead. Due to the UK lockdown rules, no one could attend in person – not even their pastor or official witnesses.

Instead, more than 200 friends and family gathered on a Zoom call to hear them say their vows. The couple now consider themselves hitched, but they’re looking forward to making their marriage legally binding when the lockdown is over. They’ve postponed their original wedding plans to September.

Sophie, 26, was unable to wear her planned wedding dress as it was at the shop, which had closed for lockdown. But she says having a ceremony at home was “absolutely amazing” nonetheless.

“I think it really drew back the sparkliness and extra stuff of a wedding and made it really obvious what was important: the two of us saying the vows to each other,” she told PA. “Even though we didn’t have everyone here it made it more intimate and special.”

Describing the ceremony, Ben, 25, added: “It’s still real. In that moment we didn’t really notice it, we were focused on what we were saying.”

Cynthia Yoboué and Mykail B, both 29, were due to get married on 11 April at Montreal Courthouse. They planned to have 30 guests, including their parents, who were due to fly in from Ivory Coast. The group had then planned to head to a restaurant. Cynthia and Mykail also planned a larger religious ceremony with all of their friends and family in Ivory Coast in July, but now do not know if that will be able to go ahead.

Amid the uncertainty, they decided to go ahead with their courthouse ceremony, but Montreal’s rules meant they could have just five people in the room: themselves, an officiant and two witnesses. Mikail’s younger brother had to stay outside the courthouse in the car, connected on Zoom.

Their parents and other loved ones watched on Zoom from around the world, calling in from countries including Ivory Coast, France, Canada, Cape Verde, Switzerland, South Africa, Cameroon, Senegal.

“Because I am Christian and it happened during the Easter weekend, between Good Friday and Easter Sunday, I was convinced that God would stay by our side no matter the risks and doubts,” Cynthia tells HuffPost. “Getting married was the most important thing.”

Despite the screens, the day was emotional and enjoyed by everyone involved. “Honestly, we didn’t expect that much and basically it was just cries all the time, both on our side and the guests’” says Cynthia.

“It was super moving and because of the emptiness of the room, that out-of-the-ordinary scene (us and a screen), and all the voices crying and screaming together, we felt like time stopped.

“We also felt relieved and genuinely happy when it was done.” 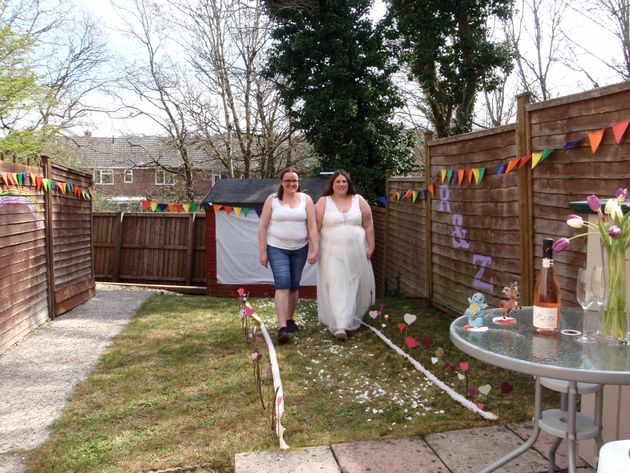 Zoe Taylor, 41, and Rachel Knee, 38, simply had to still get married on 5 April – they’d each had the wedding date tattooed on their feet and engraved it into their rings.

After finding a celebrant that would perform the ceremony online, they gathered friends and family together on Zoom for a full ‘virtual wedding’ in their garden in Thorveton, Devon. Zoe made an aisle and the pair hung bunting on their fence panels to make it feel special.

The ceremony included a remote reading from their maid of honour, vows, an exchange of rings and even a first dance – with 100 guests watching online.

While the wedding won’t be legally binding until they sign official paper work at the registry office, the couple say they will always consider 5 April to be their wedding day.

“It was the date that was important and we just wanted to make it the best occasion that we could. But it was better than we could ever have managed,” Zoe told SWNS.

“It’s been an amazing day – we couldn’t have wished for it to go any better. We had people join us who couldn’t even make the original day.”

Robert and Meredith, California, US 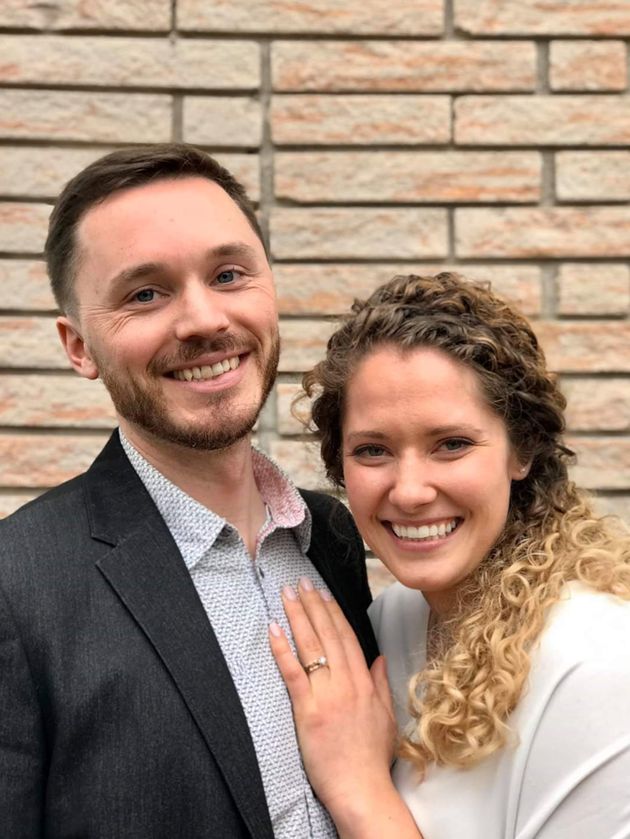 Robert Kiley and Meredith Martin, both 32, kept having to change their wedding plans to keep up with the restrictions in Ontario, California where they live.

“We originally had 300 people on our guest list, then the Ontario provincial government put a ban on groups of more than 250 in light of Covid-19, so we altered the list, then it went down to 50, so we again limited attendance. Finally, five people became the health officials recommendations.”

The pair went ahead with a scaled down version of their church wedding on 3 April, with themselves, an officiant and two witnesses attending in person, two metres apart. The pair didn’t mind scaling back their plans.

“I am an elected official, a city councillor, and I want to lead by example. We also cared about following the health directives because we wanted to help keep our community and guests safe,” Robert tells HuffPost.

Roughly half of the guests they originally invited managed to watch the ceremony via Zoom. The day was nothing like they’d originally imagined, but was still “very special”.

“We enjoyed it a great deal. Though we weren’t dressed up and nearly no one was with us, the most important parts remained: our commitment to each other before God and our community,” Robert says. “We felt very present with each other despite the constant changing of previous rearrangements. And we hope to have a service for our family as soon as possible, where we can dress up and have some semblance of what we originally envisaged.”