April 9, 2020 By admin No Comments Posted in Style

Jacqui Smith, who was home secretary under Gordon Brown, told HuffPost UK if Patel was being “sidelined” because of her gender by fellow ministers, however, it would be “appalling”.

Mystery surrounds why Patel, who role makes her one of Boris Johnson’s most senior cabinet ministers, has not yet chaired a Downing Street briefing on the government’s response to the Covid-19 crisis.

Yvette Cooper, who chairs the powerful Commons home affairs select committee, has also clashed with the minister in a series of letters over Patel’s refusal to answer MPs’ questions until the end of the month.

Patel’s role means she is in charge of law and order, policing and immigration.

Questions are being asked about a range of Home Office issues, including the lockdown’s impact on domestic abuse victims, fines handed out by cops policing the restrictions and whether the contagion is able to spread at immigration detention centres.

Some equality campaigners have also told HuffPost UK of their frustration at how no female cabinet minister has given a press conference on the virus.

Smith, who was the first female home secretary, said of Patel’s absence: “It’s very strange. I must admit that I had come to the conclusion that she was unwell.

“If that’s not the case, I think either she is failing in her responsibility as one of the most senior members of the cabinet to account to parliament and the public for the important responsibilities that she has, for example for policing in particular, or she’s being sidelined by PM and other senior ministers.

“Given the noticeable lack of women ministers in press conferences and apparently in the key Covid-19 committees, this would also be appalling.” 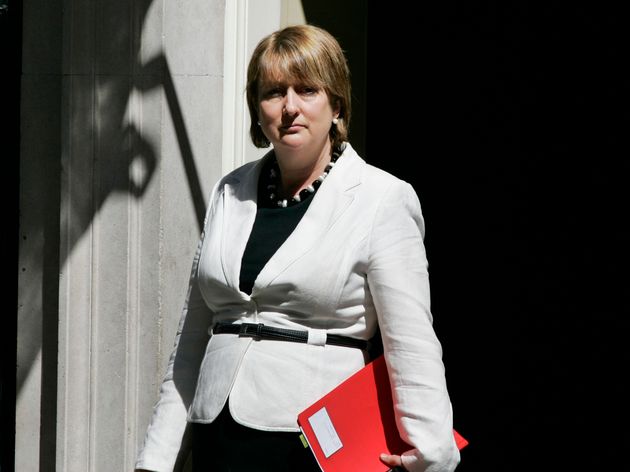 Patel is a controversial figure in Johnson’s cabinet. Before coronavirus gripped the UK, she had faced claims of bullying from senior civil servants, with Sir Philip Rutnam resigning and publicly accusing her of orchestrating a campaign against him.

The Cabinet Office had been due to investigate her alleged conduct. Patel has denied the allegations.

Asked it Patel was self isolating, the PM’s official spokesperson said on Wednesday that the home secretary has been chairing the ministerial group she leads “which is obviously looking at issues such as the enforcement of the government’s guidance”.

Asked if the government had confidence in Patel as a front-woman and if she would be chairing a press briefing, the spokesperson added: “I don’t have the advance cast but certainly the prime minister and his team have absolute confidence in the home secretary and the work she’s doing.”

Culture secretary Oliver Dowden said this morning the “home secretary is a core member” of the Cobra committee regularly meeting over the outbreak and was involved in other committees as part of her role.

Speaking to Sky News, he said: “The home secretary, because of the central role of police and law and order, is involved in the central committees and all other committees.

“I really can assure you the home secretary is across all of this and is engaged on day-by-day and an hour-by-hour basis. I see this every day myself.”

Sam Smethers, chief executive of the Fawcett Society, which campaigns for equality has shared concerns.

She told HuffPost UK: “Women have been invisible so far in the government’s response to this crisis, yet they are the majority of frontline workers placing themselves at risk on low pay. They are also the ones in fear of their lives in lockdown with an abusive partner.

“Without women at the decision making table the government will continue to get it wrong.”

Women have been invisible so far in the government’s response to this crisis, yet they are the majority of frontline workers placing themselves at risk on low pay.Sam Smethers, Fawcett Society

Mandu Reid, leader of the Women’s Equality Party said: “The lack of female cabinet ministers or other experts representing the government reflects the omission of women from its so-called ‘war cabinet’ dealing with the day-to-day developments of the outbreak.

“This glaring gap has serious real life impacts on the governments’ policy responses, which are poorer as a result.”

A Home Office spokesperson stressed that Patel would appear before Cooper’s committee and take questions.

The spokesperson said: “The home secretary has accepted the invitation to appear in front of the home affairs select committee before the end of April.

“As expected, she is currently leading the Home Office response during this national crisis, working tirelessly to keep the British public safe.”