Households across the UK are coming to terms with the new normal of near-total lockdown, with previously foreign concepts now part of everyday life.

A few weeks ago, P.E. with Joe Wicks and Zoom parties did not exist. But is the country ready for Nigel Farage in short shorts?

With Brexit increasingly irrelevant as the world wrestles with the consequences of a pandemic, the man who has spent the last two decades raging at Brussels is perhaps now casting around for something new.

Seemingly apropos of nothing, the former leader the Brexit Party took to Facebook Live on Wednesday to hold virtual court.

Before answering questions, the ex-MEP essayed the power “vacuum” left by Boris Johnson’s admission to intensive care (he wished the PM a speedy recovery) and the “wrong” choices the UK has made in its response to coronavirus outbreak.

After railing against the UK”s “house arrest”, the noted eurosceptic revealed it was “making his blood boil” that criticism of China was being dismissed as racist by “lapdogs in the Western media”.

“They are looking to take over the world in their own way,” he warned, adding that China was poised to swoop following a “fire sale” of British businesses.

And he put a ribbon on the argument with the ultimate Farage callback: “The same mob that sold us out to Brussels are happy to sell our sovereignty to China.”

Which is all very interesting stuff, but most of those tuning in were more intrigued by the ex-Brexit Party leader’s attire. While many in the comments section concurred with his views, they thought his outfit was more questionable.

And there was a wider critique of his outfit …

If you’re not familiar with the Alan Partridge reference … 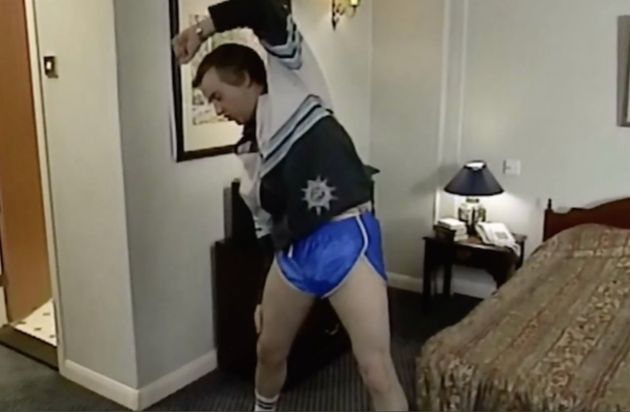 He looks like he’s going to gorge himself with toblerone and drive to Dundee in his bare feet pic.twitter.com/3AKYqFJjua

He looks like a divorcee sending a video message to the Russian bloke pretending to be his ‘girlfriend’ pic.twitter.com/3KdjRm4aTT

Farage, who raised a glass of red wine at the start of the broadcast, went on to call for Matt Hancock to be fired, and confirmed his sniffling was hay fever, not Covid-19.

And he did address the burning question that prompted the biggest reaction in the comments section.

Farage said while “I don’t doubt if you live directly under power cables it may not be good for you”, the debunked notion that the 5G network was spreading coronavirus was a “ranting conspiracy theory”.

That should put an end to that one.