Boris Johnson Awake And Breathing Without Ventilator In Intensive Care, Says No.10

April 7, 2020 By admin No Comments Posted in Style

Boris Johnson is breathing without a ventilator and is in “good spirits” while being treated in intensive care for coronavirus symptoms, Downing Street has said.

The prime minister was transferred to the intensive care unit at St Thomas’ Hospital in London on Monday evening as his condition worsened.

On Tuesday afternoon, his official spokesperson said: “The prime minister has been stable overnight and remains in good spirits. He is receiving standard oxygen treatment and is breathing without any other treatment.

“He has not required mechanical ventilation or non-invasive respiratory support.”

No.10 said Johnson has not been diagnosed with pneumonia, which affects some Covid-19 patients, but has been moved to intensive care “as a precautionary step in the event that he were to need ventilation.”

The spokesman refused to say whether the PM was able to sit up and talk or use his phone to communicate with officials, who are working from No.10, or his pregnant fiancee Carrie Symonds.

Dominic Raab, the foreign secretary and first secretary of state, is currently standing in for the prime minister.

Johnson has sent Raab a message saying he wanted him to assume some of the PM’s responsibilities “where appropriate”. They last spoke on Saturday.

Downing Street confirmed that if Raab is also incapacitated, chancellor Rishi Sunak would step into the role at the top of government according to the “established order of precedent”. 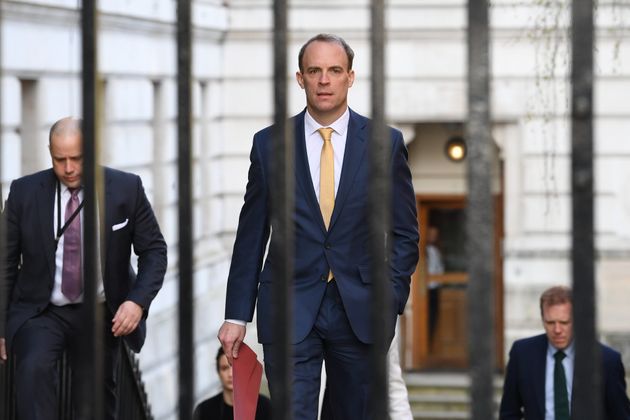 The pressure on the government was underlined this morning when it emerged that Michael Gove – one of the senior ministers leading the government’s response to the crisis – had been forced to self-isolate after a family member displayed symptoms.

Johnson’s top aide Dominic Cummings also went into self isolation last week and has not returned to No.10 since, the spokesman said.

Cabinet secretary Mark Sedwill is however working as usual.

Raab is continuing to work from the Foreign Office and is being supported by officials from across Whitehall.

He will chair the national security council if required while the PM is in hospital and has the responsibility along with the rest of the cabinet to authorise actions to protect the UK.

“The first secretary of state and cabinet have the authority and ability to respond in the prime minister’s absence.

Johnson was admitted to hospital on Sunday evening, 10 days after being diagnosed with Covid-19.

Downing Street said at the time that the move was a “precautionary step” as his symptoms of a cough and high temperature were continuing to persist after 10 days in self-isolation.

Initially he was said to have been continuing to work from his hospital bed and was receiving his ministerial red boxes.

But by 7pm on Monday, the decision was made to transfer him to intensive care so that a ventilator was close at hand if required.

The cabinet was informed shortly afterwards and the move was made public in an announcement by No 10 shortly after 8pm.

Gove this morning said Johnson was receiving the “very, very best care” and insisted that the government machine is continuing to function.

The PM has also received good wishes from leaders from around the world.

But Downing Street appeared to snub Donald Trump’s offer to approach US pharmaceutical companies to ask them to offer the PM experimental coronavirus drugs.

“Any treatment which he receives is a matter for his doctors.”