April 6, 2020 By admin No Comments Posted in Style

You’re reading The Waugh Zone, our daily politics briefing. Sign up now to get it by email in the evening.

Boris Johnson, who tested positive for Covid-19 some ten days ago, has been taken into intensive care.

Widespread fears for the prime minister’s health, coupled with the Queen’s extraordinary “we will succeed” address to the nation last night, meant Dominic Raab led this afternoon’s Downing Street briefing amid growing public unease about the pandemic.

As the foreign secretary took to the podium, people were clamouring to hear how the PM was – and just when this whole nightmare will end.

Asked repeatedly about Johnson’s condition, Raab mostly stuck to the Downing Street script, before sparking fresh concern when he conceded he last spoke to Johnson “in person” on Saturday.

People were left wondering if Johnson last communicated with his second-in-command two days ago, or if Raab was simply their last video call.

Number 10 later confirmed the PM’s condition had worsened in a statement that has left everyone deeply troubled: “Over the course of this afternoon, the condition of the prime minister has worsened and, on the advice of his medical team, he has been moved to the intensive care unit at the hospital.”

The press conference offered a glimmer of hope, at least, on the UK’s exit strategy. Hospital admissions, which until April 1 were rising steadily, are now “starting we hope to slow down”, deputy chief scientific officer Dame Angela McLean said.

Pressed on whether a relaxation of lockdown measures may follow, Raab was tight-lipped, however, saying “we do not want to confuse the message” and warning “we are not past the peak” of the outbreak. 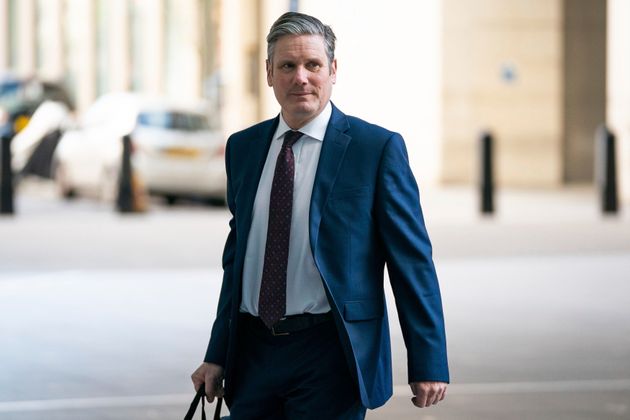 Labour’s newly-elected leader Keir Starmer, meanwhile, has begun to stamp his authority on the party by appointing a new shadow cabinet.

As expected, Starmer signalled he wanted a clean break with the past and sent a series of Jeremy Corbyn allies to the backbenches.

Ian Lavery, Baroness Chakrabarti, Richard Burgon, Dawn Butler and Dan Carden were among a slew of left-wing frontbenchers who summarily faced the sack.

One of the first people on the “got to go” list was Barry Gardiner, who, some may recall, once described Starmer’s Brexit policy as “bollocks”.

“What’s left of the left?,” one staffer asked. The answer is the soft left as a string of mainstream, non-factional figures have been brought to the fore.

Leadership rivals Rebecca Long-Bailey and Lisa Nandy have been given roles as shadow education secretary and shadow foreign secretary respectively.

Other smart northern women have been handed a chance to shine.

Rachel Reeves as shadow chancellor to the Duchy of Lancaster will be across the despatch box to Michael Gove and the highly-rated Bridget Phillipson was named shadow chief secretary to the Treasury.

One appointment seemed to sum up the reshuffle and it was that of former leader Ed Miliband as shadow business secretary.

Throughout the leadership race, perhaps Starmer’s most damaging criticism was that he was “Miliband mark two”.

Allies of the new leader will stress that few politicians are as knowledgeable about climate change – which the business brief encompasses – as Miliband. They will also underline that even though the UK rejected Miliband in 2015, Cameron, May and even Johnson pivoted towards the more interventionist state that Miliband advocated.

Nonetheless, critics will say Starmer has risked pigeonholing himself.

Yvette Cooper and Hilary Benn, two of the party’s most respected figures were not welcomed back, but they could prove more powerful assets in their current roles chairing high-profile Commons committees.

New Labour favourite David Lammy was named shadow justice secretary, but it was notable that Starmer chose generally not to elevate Blairites with the likes of Jess Phillips, Stella Creasy and Wes Streeting still languishing on the backbenches.

But it does not mean they will be left out in the cold forever. Starmer’s pivot away from the left could easily become strides towards the centre if local elections are as punishing as the polls currently suggest.

Quote Of The Day

“This is terrible news. I know the thoughts and prayers of everyone across the House are with the Prime Minister and his family right now. We all wish him a speedy recovery.”

– Sir Lindsay Hoyle, Speaker of the House of Common on Boris Johnson’s condition.

Police officers may be able to get tests to check if they have coronavirus by the end of the month, MPs were told. Force chiefs told the Commons home affairs committee antigen tests – a swab which shows if someone currently has the virus – could become available for staff within weeks.

‌Culture Secretary Oliver Dowden is set to meet tech giants over the spread of coronavirus conspiracy theories online. It comes following reports of phone masts being attacked after theories spread online suggesting the rollout of 5G was linked to the Covid-19 outbreak.

‌More flights to repatriate UK nationals stranded around the world have been announced, but travellers will have to pay up to £1,000 for a ticket. The Foreign and Commonwealth Office (FCO) revealed details of flights to bring tourists back from India, Nepal, the Philippines and South Africa. Hundreds of thousands of people around the world are struggling to return to the UK amid the pandemic.