'No One Is Protecting Us': Bus Drivers On Front Line Slam Lack Of Coronavirus Precautions

April 2, 2020 By admin No Comments Posted in Style

Bus drivers risking coronavirus to get vital key workers to hospitals and schools say they have been cast aside, with no protective kit and poor cleanliness in their cabs.

Lorraine, who works at a south London depot, is currently off sick with Covid-19 symptoms including persistent coughing, a sore throat and fatigue.

She believes she contracted it while on the job and is following NHS advice to self-isolate.

Before falling ill, the 57-year-old saw drivers were not being provided with protective gear such as face masks and gloves, and says redundant “alcohol free” hand sanitisers were being used.

“What germs is that supposed to kill?” she said.

Moreover, Lorraine alleges that a shortage of managerial staff and cleaners mean drivers are forced to work in potentially contaminated environments at a time when hygiene is paramount.

On numerous occasions, she had to deep clean her own compartment between shifts.

“The buses aren’t even clean – how about that?” she said.

“The manager’s not there, he’s at home because he has underlying health issues, so that’s not being sorted. Other managers are off and I don’t know why; some are able to work from home while we, the drivers, cannot.

“More cleaners need to be brought in.”

More than 2,700 people have so far signed a petition asking for drivers to be paid a full wage in the event that they have to self-isolate due being high-risk key workers.

Currently many are only eligible for statutory sick pay which is less than £95 a week.

In addition to combating the illness, Lorraine is worried about staying financially afloat. She called the sick pay a “joke”.

“When everybody else was told to stay in their house, we’ve gone out there and carried people and when we’re sick, we have to get £100?” she said.

“Even when I am well, I am not going to go back just to get a wage when they’re not taking my health seriously. We don’t even get gloves!

“They buy some stupid rubber gloves which quickly run out. You want me to drive your bus but you’re giving me no protection – no mask or anything!”

I have Covid-19 because I’ve been driving the bus. I wasn’t sick before. If bus drivers were staying in, who would be taking people out?Lorraine, bus driver

Lorraine feels that, in some instances, frontline staff members are being deliberately discriminated against.

“I feel like most of the drivers are Black – we are the guinea pigs. That’s how I feel,” she said.

“Same with the doctors and nurses. I think it’s disgusting. Look how quickly the stars get tested, look how quickly Charles got tested, Boris Johnson – and they’re not on the frontline like we are. This country is a joke.

“I’m sick because I’ve been driving the bus. I wasn’t sick before. If bus drivers were staying in, who would be taking people out? You can’t have another set of rules for us, whereby we have to go out and work, and then not protect us when we do.”

She added: “We’re going to lose a lot of bus drivers to the coronavirus outbreak. That’s the only time people want to sit up and pay attention but the companies are taking liberties with people’s lives.”

He hasn’t been given any protective provisions apart from a 50ml bottle of hand sanitiser which staff scramble to refill, between shifts, from a communal pump.

“The last two weeks have definitely been the most stressful since I started five years ago,” the 55-year-old told HuffPost UK.

Most of the national conversation has been about NHS workers’ rights and it’s an important discussion. But what about us? Who’s looking out for our interests?Abellio driver

He had to turn off his engine recently following an exchange with a passenger who did not want to stand two metres away from him in accordance with government advice.

“When I asked him to move down, the passenger told me he didn’t need to because of the plastic screen. I replied: ‘That screen is to stop crackheads from stabbing me, it’s not going to stop the coronavirus.’

“Telling passengers to leave the bus is not typical for someone like me.

“But if he’s not going to respect my social distance then he should catch the next bus where maybe there’s more room. This is my health; it’s a matter of life and death.”

It was only on Tuesday that managers put a sign on the seat immediately behind the drivers, secured with some tape, advising passengers to use alternate chairs, Henry explained.

“But as passengers come on the bus, they’re nearer than 6ft away from you in any case – so drivers are still exposed,” he added.

While the UK remains on lockdown, Henry is proud to be on the frontline in the battle to contain the virus spreading, but has reservations about how seriously the general public is taking the matter.

“At the moment, I know that I’m getting people who need to be somewhere to where they have to go; I signed up for it and I don’t mind doing it,” he said.

“I’m prepared to take my own personal precautions the best I can while contributing to keeping this country country and keeping people alive.

“But I think the vast majority out there are just taking the mick. They don’t need to be out and about in their numbers. A lot of people don’t seem to be taking this seriously.

“If it’s shopping then, in London at least, there’s nobody who isn’t walking distance from a corner shop. What is it they’re out on the streets doing?

“The government are not leading effectively. If someone had said to me two months ago that I’d be asking for soldiers on the street to keep people in their house, I would’ve laughed in their face. But I don’t think people are listening.”

That screen is to stop crackheads from stabbing me – it’s not going to stop the coronavirus.Henry Dyer, bus driver

When the government released an extensive list of workers who are critical to the coronavirus response, it included bus drivers, cleaners and carers – work previously dismissed as “unskilled” under its plans for a new immigration system.

Many hailed the move as overdue recognition of these workers’ value.

“You’ve got to remember this is the same government who, months ago, was saying that anyone who earns under £26k was unskilled and unessential. Right now they have to pay us a bit of respect – but let’s see if it’s still there when this blows over,” Henry said. 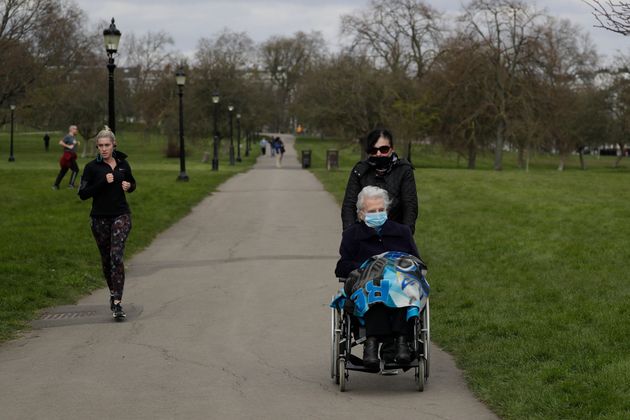 Arriva staff member Wayne told HuffPost UK: “It’s not nice the fact that we’re living in these times and we have to deal with this situation. We’re thrust out there as key workers, on the front line, and no one’s really paying us any mind.

“We’ve raised concerns with the firms; we’ve got to think about ourselves because they’re not thinking about us. The only thing they’re thinking about is not losing mileage and profit margins. Nothing else.”

An Abellio driver, who has asked to remain anonymous for fear of losing his job, also painted a bleak picture of working conditions for bus staff.

Staff at his company have not been provided with face masks, he said.

Echoing Henry’s experiences, the driver said his company is neglecting to properly secure signage advising passengers to maintain a two-metre distance from the driver and refrain from occupying the seats closest to them.

He has a flimsy poster on his bus and, where it constantly falls on the floor between journeys, the driver has to stop what he’s doing to scrape it up – sometimes without gloves, which haven’t been provided.

On one occasion, frustrated with the situation, the driver reeled off bus ticket receipt paper and wrapped it around the seats that passengers shouldn’t occupy.

That, coupled with the lack of protective material available to them, exacerbates the risk drivers face at a time where Covid-19 cases are on the daily increase and a global emphasis is being placed on the importance of good hygiene.

“We’re treated like numbers on a piece of paper, statistics, and not like human beings,” he told HuffPost UK.

“This job is already demanding as it is – I should not have to be going out of my way to ensure that my health and wellbeing isn’t damaged while doing an honest day’s work.”

Chancellor Rishi Sunak said the government would subsidise 80% of workers’ salaries up to £2,500 per month if they were furloughed.

However, if he falls ill, this Abellio driver is only entitled to statutory sick pay of £94.25. In the event that he falls ill while working, he would be at a distinct disadvantage.

“I’m scared about catching coronavirus and what it’ll mean for my family. Not only could I pass on a virus that I would’ve contracted will working in these conditions but I won’t be able to provide financially,” he said.

“Bus drivers matter, too; most of the national conversation has been about NHS workers’ rights and it’s an important discussion. But what about us? Who’s looking out for our interests? We transport the NHS workers to the hospitals in the morning and bring them home.”

Look how quick the stars get tested, look how quick Charles got tested, Boris – and they’re not on the frontline. This country is a joke.Lorraine, bus driver

He said that drivers aren’t even able to get refreshments in vending machines or at on-site coffee shops due to closures – and managers do not appear to care.

“We’re hung out to dry, it’s a simple as that. This outbreak has really exposed how badly some employers treat their staff.” 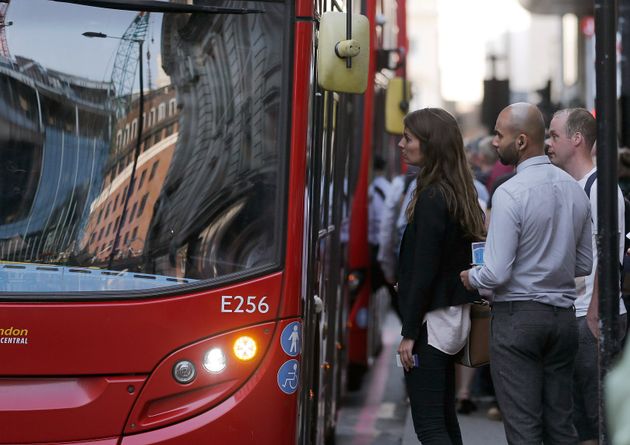 The government is set to offer the bus industry a bespoke wage deal, allowing critical services to continue during the coronavirus lockdown, The Telegraph reported last week.

This comes after the death of a Nottingham bus driver, who had been self-isolating with coronavirus symptoms, spurred criticism from a trade union.

Another union, RMT, also highlighted importance of safety measures for drivers after some have become infected.

A Plymouth-based driver for Stagecoach, 60, was reported to be seriously ill in hospital with Covid-19 last week.

In Bristol, a driver died on Saturday after testing positive for the virus, and staff who came into contact with him are self-isolating.

The Trades Union Congress (TUC) calling on government to take further steps to protect workers who are still going into work on Wednesday.

Unions are concerned that many workers who can’t work from home are being exposed to unnecessary Covid-19 risk because their employers are not putting adequate safety measures in place.

A Unite spokesperson declined to comment when approached by HuffPost UK.

Go Ahead, Abellio, Stagecoach, Arriva and Transport for London had not responded to requests for comment.