Health and safety chiefs have been accused of “ignoring” pleas to intervene and protect the health of workers amid the coronavirus crisis.

Three unions have now joined forces to ask the Health and Safety Executive (HSE) to directly intervene to tackle companies who are “stretching the interpretation of essential workers” by making staff show up when they don’t need to.

It comes after staff in a range of industries told HuffPost UK of their fears after being made to “carry on as normal”, with some unable to maintain safe social distancing levels despite government advice.

Prospect, the Public and Commercial Services union (PCS) and the FDA have written to HSE’s gold command unit for the second time in a week, demanding they “fulfil their duty as the independent regulator in charge of enforcing health and safety at work”.

Combined, the organisations represent hundreds of thousands of civil servants, engineers, managers and other specialists.

The letter, seen by HuffPost UK, says: “We have yet to receive a response or even an acknowledgement to our letter and are aware that there is significant disquiet on social media about HSE’s apparent silence on what is clearly a workplace issue.

“We are further aware that a cross-party group of 128 MPs have written to government asking for them to act.

“We are concerned not only by the apparent inaction but also by the potential reputational damage this will cause to HSE as an independent regulator in the longer term.” 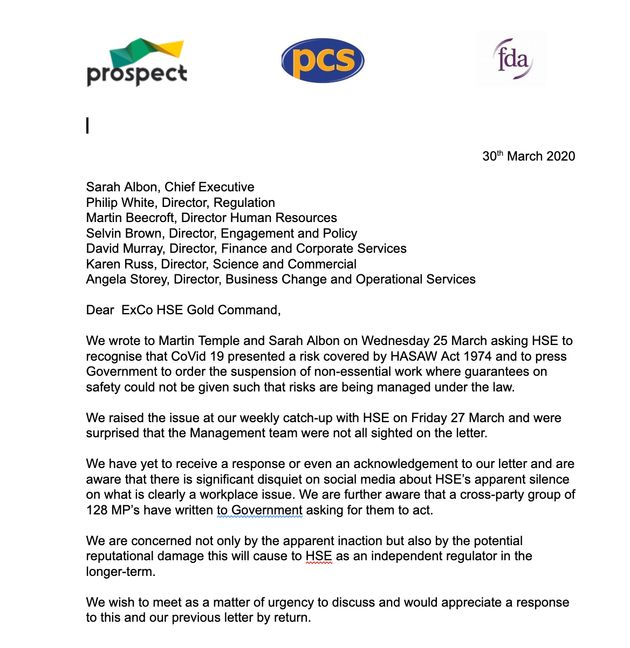 The unions say attempts by employers to keep as many staff in work as possible not only puts them at risk, but also risks the health of HSE inspectors who may be asked to conduct extra visits and assessments as a result.

Garry Graham, Prospect deputy general secretary, said: “The government remains behind the curve on its response to the epidemic in its advice to workers and employers. We are a week into lockdown, but every day Prospect receives more concerns from members.

“They are either having to go to work despite not being key workers, or they are key workers and are worried about the number of non-key workers they are forced to encounter.

“The HSE has a regulatory duty to protect health and safety at work. We call upon HSE to pressurise the government to provide clarity on who should be going out to work, and who should not. If you leave things open to interpretation, some employers will inevitably take advantage and put workers and the capacity of the NHS at risk.”

A spokesperson for HSE said the organisation was aware of the situation and was “in discussions” about it.

“It is an issue that is really important to us”, they added.