Coronavirus: Boris Johnson Threatens Lockdown As He Urges Public To ‘Take This Seriously’

Boris Johnson has warned the UK could face an enforced lockdown within 24 hours if the public fail to heed the government’s advice on social distancing.

It comes after crowds of people were pictured closely mixing in parks and open spaces, despite being told they risked spreading the disease if they did not stay at least two metres apart.

The prime minister said “whenever possible” people should stay at home but that it was important for their wellbeing to get exercise outdoors.

He stressed, however, that “fresh air” was no protection against the virus and went on to caution that if the public failed to listen, ministers would order a full lockdown as early as tomorrow.

It came as the Department for Health and Social Care confirmed on Sunday that the UK death toll had hit 281.

Johnson said: “I don’t think you need to use your imagination very much to see where we might have to go, and we will think about this very very actively in the next 24 hours.

“We need to think about the kind of measures we’ve seen elsewhere – other countries that have been forced to bring in restrictions on people’s movements altogether, now as I say I don’t want to do that.”

Later in the press conference, the PM appeared to lose patience, telling one reporter: “The best thing that everybody can do – if you’re going outside, observe social distancing. Stay two metres apart – it’s not such a difficult thing. Do it.”

Earlier this week, Johnson ordered pubs, restaurants and gyms to close and pleaded with people to stay at home in a bid to slow the contagion.

Johnson said the government had taken “very draconian steps” in closing schools, pubs and shops – but he did not rule out going further.

The PM said: “It’s crucial that people understand that tomorrow that the schools are closed.

“I want, of course I do, people to be able to go to the parks, open spaces and enjoy themselves.

“It is crucial for health, physical and mental well-being.

“But please follow that advice and don’t think that fresh air in itself automatically provides some immunity.

“Take this advice seriously, follow it, because it’s absolutely crucial.” 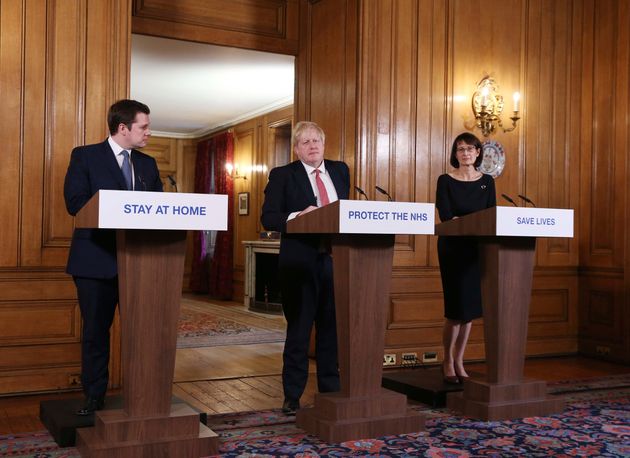 GPs have been working with government to identify 1.5m people with underlying health conditions who were at an increased risk of serious illness.

Ministers have now written to them urging strict self-isolation and offering, where needed, the delivery of food parcels to the most vulnerable.

“In recent weeks heroic workers in the NHS, social care and public services in local government have been shouldering the country’s burden,” he said.

“I think we owe it to them and the most vulnerable in society to stay home, to protect the NHS and, by doing this, to save lives.

“And so today we have to go further to shield the most clinically vulnerable people to help save their lives.”

Johnson also thanked people who had stayed away from elderly parents on Mother’s Day.

He said: “I want to thank everybody in the country today for the whole effort we are collectively making.

“You name it, absolutely everybody who is keeping this country going today.

“I want to thank everyone who didn’t visit their mum for Mother’s Day, but Skyped them or rang them instead.

“Thank you for your sacrifice, I know how tough it must be.”