How Long Do We Have To Wait For A Coronavirus Vaccine - And How Will It Work?

Why Isn’t The UK Testing Everyone With Coronavirus Symptoms?

Historically, the average vaccine took 10-15 years to create, Professor Robin May, an expert in infectious diseases based at University of Birmingham, tells HuffPost UK. “So if we can get this down to 12-18 months – I mean that’s cold comfort at the moment, but it’s still an extraordinary acceleration of pace.

“The current trials are obviously underway, that’s an exceptional research effort, it’s gone really, really fast so far. But even if we get a clear answer in the coming weeks, there is still this huge problem of manufacturing and scaling-up to address.” 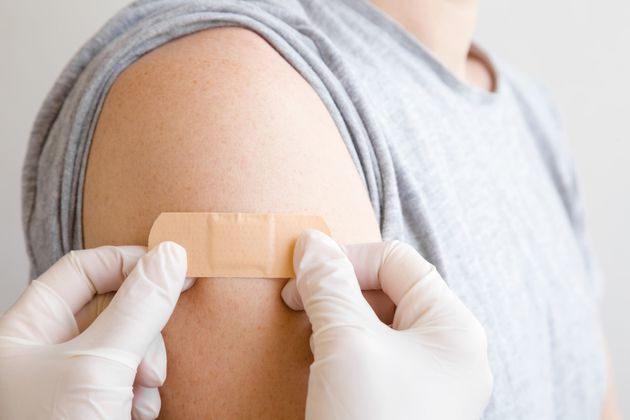 How would a coronavirus vaccine actually work?

Firstly, we need to talk about what’s going on in our body when we are exposed to an illness. Take the common cold as an example. If the cold virus enters the body, the body sees it as foreign and issues a response. “Part of that response is these cells called T cells and P cells which are incredibly specific,” explains Prof May. The cells recognise a tiny bit of the cold virus protein and launch an immune response against it. After the infection’s gone, some of those cells remain as memory cells – essentially for most of your life.

If those cells encounter the same virus again in the future, there’s a much faster, much more aggressive reactio, which is why if you get one strain of the common cold, for example, you won’t get reinfected with it next time (and come down with all of the annoying symptoms). Your immune system has seen it before and knows what it’s looking for. It builds up a strong defence.

A vaccine works by triggering this immune response. It exposes your body to a snippet of the virus so your body immediately recognises it in the future and knows to fight against it straight away.

Traditionally, vaccines would be made from a weakened or killed virus, but more recently, there’s been a focus on using one or two molecules off the surface of a virus, rather than injecting a person with a whole virus, says Prof May.

The advantage of this is that people shouldn’t get sick from the virus or have nasty side effects, because they’re only being exposed to the tiniest fragment of it – but still enough for your body to recognise it in the future.

One of the approaches currently being used with Covid-19 is to identify proteins on the surface of the virus itself and see if those proteins can be recreated. “The idea would be you’d inject those proteins into people, the people would launch an immune response against the protein and then that would act as a vaccine,” explains Prof May.

The vaccine currently in human trials in America, known as mRNA-1273, is not actually made from the virus that causes Covid-19. Instead, it’s made up of a short segment of genetic code copied from the virus which scientists have made in a laboratory.

That code is known as RNA – and scientists consider it safer than putting the actual virus into someone’s body. “It’s basically like giving someone the recipe to bake their own cake, rather than giving them a cake which might have been left on a shelf for a long time and is a bit dodgy,” says Prof May.

It’s also a lot speedier to use in a vaccine because you can produce RNA molecules very fast and at a “very high purity” – so there are fewer risks of side effects and it’s easier to scale up and therefore mass produce. “But it’s relatively new, relatively untested technology,” he says. “Hence, watch this space.”

One of the biggest challenges scientists face is to ensure the vaccine is safe. Gary Kobinger, a virologist at Laval University in Canada, told New Scientist: “We could have a vaccine in three weeks, but we can’t guarantee its safety or efficacy.” With so much at stake, it’s not something you want to rush.

Putting RNA in a vaccine has been tested before and has “seemed promising”, says Prof May. “What you want to avoid is if that protein you express happens to bare some similarity to a human protein, there is a risk – a small risk – that the body might react to that and then react to itself, and you might get autoimmunity.” This is where the immune system attacks itself. “There are lots of ways to minimise the risk but you don’t know that until you start testing it [in humans],” he adds.

The last really big hurdle is how, once we’ve passed the testing stage, a vaccine like this is scaled up to use among the public. “Demonstrating safety is all well and good, but when you’ve done that you have to scale up,” says Prof May. “And particularly for a pandemic like this, we’ll have to scale up on a level that’s never been attempted before.”