British-Iranian woman Nazanin Zaghari-Ratcliffe has been temporarily released from the Iranian jail where she has been kept since 2016.

The charity worker and mother-of-one was released on furlough for two weeks, until April 4, from Tehran’s notorious Evin prison on Tuesday.

A statement from the Free Nazanin campaign run by her husband Richard Ratcliffe said: “Unfortunately, Nazanin will be exceptionally required to wear an ankle tag during the furlough, which her parents have now hired from the authorities. Nazanin’s movements will be restricted to 300m from her parents’ home.

“This makes her release more comparable to house arrest than the standard furlough arrangement that has been granted to other prisoners in Evin this week.”

Zaghari-Ratcliffe is among 85,000 prisoners temporarily released from jail by the government in Tehran because of the coronavirus outbreak.

In a statement released on Tuesday, she said: “I am so happy to be out. Even with the ankle tag, I am so happy. Being out is so much better than being in – if you knew what hell this place is. It is mental. Let us hope it will be the beginning of coming home.

“My thinking is that they want to keep me, but outside of prison until they sort
out this thing. But to be honest, I just want to go home. I think they are
showing a good gesture, as they are hoping to strike a deal. So they want to
keep me out. If the deal won’t happen, then they will drag me back in. But if it
does, then they will let me go from here.”

Ratcliffe said: “My feelings today have been all of a mix – pleased at the happiness for Nazanin and Gabriella, but fear this is a new drawn out game of chess. Trepidation over how furlough last time ended. It is hard to relax just yet.

“This furlough is a positive step, but it is not a victory – a two week release
with a permanent ankle tag and a 300m range is obviously not meant to be a
solution. For the IRGC I am sure it is meant to look like house arrest. But we
are hoping it is a confidence building measure and that things will move
forward from here.

“Thanks to all those who have made this step happen in the UK Foreign
Office and in Iran. I am relieved it finally did, as it would have been a really
bad sign if after all the announcements furlough did not happen this week.”

Zaghari-Ratcliffe was arrested in April 2016 at Tehran’s Imam Khomeini airport while on holiday and visiting her parents with her young daughter, Gabriella.

She was sentenced to five years in prison over allegations of plotting to overthrow the Tehran government, which she denies. 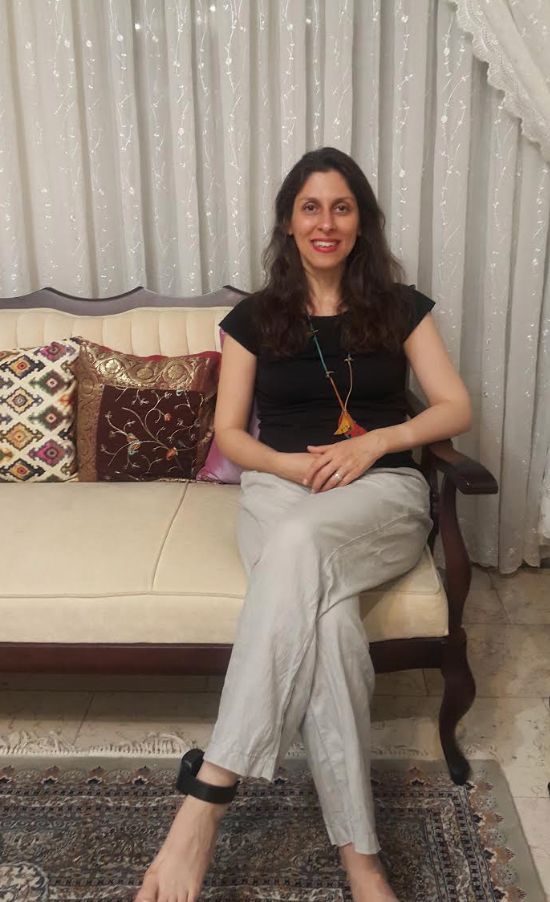 She has been afforded diplomatic protection by the UK government, which states that she is innocent and that her treatment by Iran failed to meet obligations under international law.

The British government is understood to be seeking clarification from the Iran on the situation.

It is suggested that Zaghari-Ratcliffe is being held as a bargaining chip in a £400m dispute between the UK and Iran over a deal for Chieftain tanks struck in the 1970s.

The contract was terminated after the Shah of Iran was deposed in the 1979 revolution, but Iran had already paid for the tanks and demanded its money back.

There are hopes Zaghari-Ratcliffe could be released if the financial dispute can finally be settled.