Julia Roberts‘ toothy grin has always been her signature weapon. In Erin Brockovich, she discharges it within two minutes. Attempting to persuade a doctor to hire her for a lab job without any medical experience, Erin rattles off her qualifications: three kids, great people skills, observant, loves geology. “You’ve got a really nice office,” she finishes, flashing the Julia Roberts Smile, which in another movie might be enough to seal the deal. “Look,” the doctor responds, beginning the inevitable letdown. The smile vanishes like a character abruptly leaving the room. A beat follows. The credits begin.

Those opening moments are movie-star bliss. Really, all 130 minutes of Erin Brockovich are movie-star bliss, a sizzling showcase that depends on the charisma of its lead actor. It’s possible there’s no film I’ve seen more times, barring The Wizard of Oz when I was six. I own“Erin Brockovich on DVD (remember physical media?) but still watch it anytime it’s on TV. I can recite every one-liner, and there are a lot of one-liners. “They’re called boobs, Ed.”

Twenty years after it came out, it’s just as watchable, maybe more so now that original studio projects meant for adults are basically endangered. Erin Brockovich represents the best of early-2000s mainstream cinema, when Steven Soderbergh directing Julia Roberts in a crowd-pleasing environmental drama translated to three weeks of box-office dominance and five Oscar nominations. This movie was a big deal. It peaked on more than 3,000 screens and became the year’s 10th-highest-grossing title. Roberts was the first woman in Hollywood to earn $20 million for a role, whereas Mel Gibson, Jim Carrey and other men had commanded that sum for years. 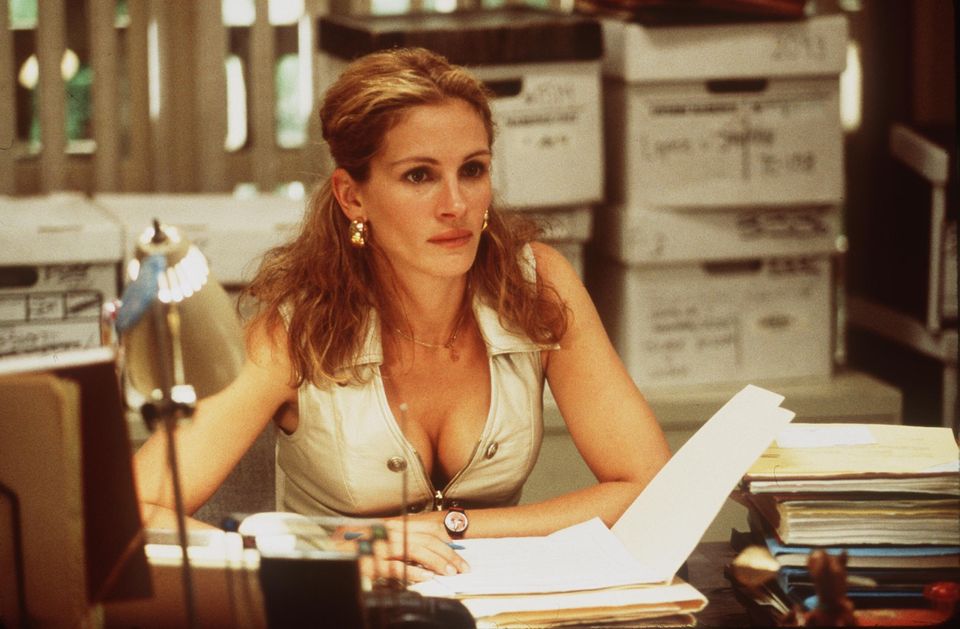 Erin Brockovich opened on 17 March 2000, marking the sixth instalment in a Roberts hot streak that already included My Best Friend’s Wedding, Conspiracy Theory, Stepmom, Notting Hill and Runaway Bride. She was indisputably the world’s most famous actress, and in this movie she could merge all of her trademarks. Erin is brazen but infinitely lovable, the equivalent of a hardened pop diva who rises from the ashes, falls for the guy next door (Aaron Eckhart sporting an improbable biker beard) and refuses to forfeit her newfound success for anyone.

The movie follows a design more or less similar to that of All the President’s Men, Norma Rae, Silkwood and A Civil Action, though writer Susannah Grant told me she wasn’t consciously invoking any antecedents. After Erin talks her way into a clerical gig at a California law firm run by Ed Masry (Albert Finney), the attorney who’d represented her in a car accident, she stumbles across documents exposing the toxic groundwater that the multibillion-dollar Pacific Gas and Electric Company knowingly pumped into a local desert town. Her big-screen bona fides swaddled in the tight-fitting clothes of a cash-strapped everywoman, Roberts plays a striver without an advanced education who effects change by asking questions.

The difference between Erin and the protagonists in those other movies is her brass, something no fancy degree can supply. She cherishes an F-bomb, boasts an arsenal of lacerating retorts and swears by pushup bras — traits that seem aspirational with someone like Julia Roberts bringing them to life.

Indeed, Erin Brockovich remains a feat of screenwriting. Grant had already penned episodes of Party of Five and the 1998 Cinderella update Ever After when she found out the rights to the real Erin Brockovich’s story had recently been optioned. The producers were courting Thelma and Louise scribe Callie Khouri, but when Khouri and other go-to writers passed, Grant scored a meeting with Brockovich, who had final approval. They hit it off. Grant had an affinity for Brockovich’s mouthiness. More importantly, she realised that, unlike All The President’s Men, for example, institutional corruption shouldn’t be the very core of the story.

“I did understand that there was a lot of complicated information that I wanted the audience to understand and appreciate and really digest, and I came to believe that the spine of the story would be stronger if it was an emotional spine rather than an informational spine,” Grant said. “So I really structured it [around] Erin and Ed’s relationship. Structurally, it’s a love story. It’s not a romantic love, obviously, but it is an interpersonal love story. That was going to give me the most freedom. There’s a scene where she’s explaining the degree of malfeasance on PG&E’s part, and all of that is in there, but what she’s really doing in that scene is proving to Ed her worth and that he should be stepping up and meeting her where she is.”

The movie asked us to do the same for Roberts, who is often treated more like a brand than a singular talent. If Runaway Bride was a bland effort to repackage her chemistry with Pretty Woman co-star Richard Gere, Erin Brockovich” was the rebuttal — proof that her wattage shines brightest without canned reunions or formulaic genre retreads.

Interestingly, the one-liners that make “Erin Brockovich” such a treat — my favourite, delivered to a surly lawyer (Veanne Cox) who’s just told Erin they began on the wrong foot: “That’s all you got, lady: two wrong feet in fucking ugly shoes” — weren’t something Grant had focused on. She certainly wasn’t imagining them coming from Roberts, as no one had been cast yet. 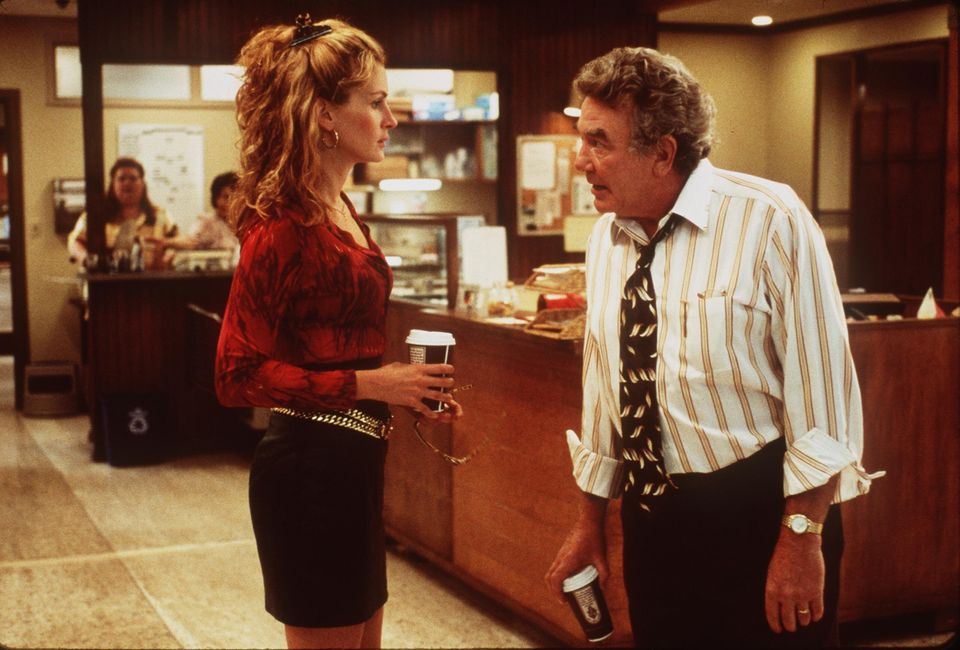 “If I were to set out to write a one-liner or a great line and that were my motivation, I would probably be completely paralysed,” she said. “Erin’s got a mouth on her and I’ve got a mouth on me, and she loves an opportunity to dress down someone who underestimated her. She just digs in with relish. She bellies up to the bar, and I love that about her. I had spent a tonne of time with her. I had taped all our conversations and then I had transcribed them myself. I knew I needed to get her voice deeply in my head in order to be able to write it. It’s fun to write somebody like that.”

(Richard LaGravenese, whose credits includes The Bridges of Madison County and Behind the Candelabra, did some rewrites of the script — a fairly common practice in Hollywood — but Grant retained sole credit and was nominated for an Oscar. She declined to discuss LaGravenese’s contributions on the record.)

It’s easy to take Erin Brockovich for granted. “After proving for about 40 minutes what a marvellous actress she can be, Ms. Roberts spends the next 90 content to be a movie star,” New York Times critic A.O. Scott wrote in his review. But Roberts’ movie stardom is the selling point. When the Julia Roberts Smile finally gives way to the Julia Roberts Laugh — a hearty bellow that seems to bubble up from some deep internal well — it’s during a rare romantic exchange with Eckhart, as Erin briefly abandons her impudence for a little pillow talk. The laugh is earned because the film knows not to overextend the features that can reduce Roberts to a mere emblem of herself. It’s a flashy performance that feels intimate because there’s a movie star at the centre, someone we can trust to provide substance beyond any crusading sentimentality. (She howled even louder a year later during her Oscar speech.)

In other words, it’s Roberts who makes Erin Brockovich so rewatchable, though she’d be nothing without Soderbergh’s attentive hand, Grant’s sharp words and Sheryl Crow’s crooning. In the closing scene, after they’ve won the class-action lawsuit against PG&E, Ed surprises Erin with a $2 million bonus, but not before she reams him out one more time. The figure on the check leaves her speechless, a first. And in that silence, we cheer. Two decades later, it’s still great to see Julia Roberts win.