Five Things You Need To Know About Coronavirus Today

Coronavirus is dominating the headlines as the number of cases grows each day.

According to official figures, 460 people in the UK have now tested positive for the virus while eight people have died after contracting it.

Here are the main developments you need to know today:

Trump announces travel ban from most of Europe

Donald Trump announced on Wednesday night that all visitors from Europe – with the exception of those from the UK – would not be permitted to enter the US.

The ban is set to come into force on March 20.

“If we are vigilant and we can reduce the chance of infection [and] impede the transmission of the virus,” Trump said. “The virus will not have a chance against us.”

The shock announcement came as a surprise to the EU, one unnamed diplomat told Reuters, with Brussels allegedly not being warned about the ban despite Trump’s insistence that he had been in contact with allies.

“There was no heads-up, no coordination as the president claimed,” the diplomat said.

After sowing confusion by suggesting that “trade and cargo” from Europe would also be banned, Trump later clarified that “trade will in no way be affected” by the restriction. In fact, the travel curbs will sharply curtail trade in services.

Trump faulted Brussels for failing to restrict travel from China, where the virus originated, a decision that he said resulted in clusters of the disease in the United States being “seeded by travellers from Europe.”

William Reinsch, a former senior US Commerce Department official said the restrictions would be “enormously disruptive” despite the president’s clarification that cargo traffic could continue between the two huge trading partners.

The announcement would hit daily travel volume, tourism, hotels and restaurants – all of which were already suffering amid growing fear about the virus, said Reinsch, now a fellow at the Centre for Strategic and International Studies.

Australia is also considering an EU-wide travel ban, The Guardian reported, following a week-long extension of the current ban in place on foreign nationals from China, Iran, South Korea and Italy. 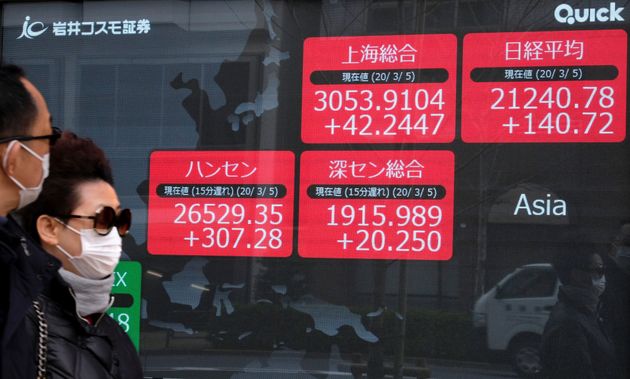 The FTSE 100 index of leading London-listed companies fell more than 5% in early trading following the WHO’s upgrading of coronavirus to a worldwide pandemic.

“Even though we do have substantial support coming through from governments and central banks alike, the dispersion of the virus so far continues to mark the risks of dragging the global economy into recession,” said Jingyi Pan, an analyst at IG in Singapore.

In Asia, MSCI’s broadest index of Asia-Pacific shares outside Japan fell 3.2% and touched its lowest level since early 2019, while Japan’s Nikkei N225 crumbled 5.3%.

On Wall Street, the Dow’s loss dragged it 20% below the record set last month, putting the index in a bear market – when the stock market declines by 20% or more from the highest point to its subsequent lowest point.

The broader S&P 500, which professional investors watch more closely, is a single percentage point away from falling into its own bear market, which would end the longest bull market in Wall Street history.

The decline has been one of the swiftest sell-offs of this magnitude. The fastest the S&P 500 has ever fallen from a record into a bear market was over 55 days in 1987.

Vicious swings like Wednesday’s session are becoming routine as investors rush to sell amid uncertainty about how badly the outbreak will hit the economy.

On the supply side, companies may have fewer things to sell as factories shut down and workplaces dim the lights because workers are out on quarantine.

On the demand side, businesses see fewer customers when people huddle at home instead of travelling or dining out.

Many analysts say financial markets will continue to swing sharply until the number of new infections stops accelerating. 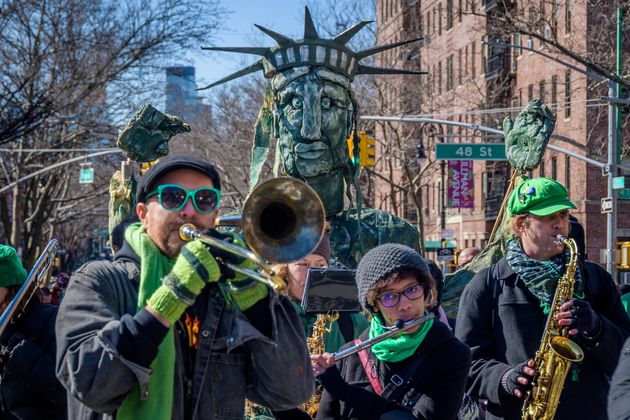 The annual St Patrick’s reception at the White House has been cancelled, as have several parades both in Dublin and New York.

The move to cancel the reception became apparent late on Wednesday when it was not included on Donald Trump’s daily schedule for Thursday.

It followed the cancellation of a range of St Patrick’s Day parades in cities including Dublin, Belfast, New York, Chicago, Boston, and Philadelphia.

Leo Varadkar announced on Monday all parades and festivals in the Republic of Ireland would not go ahead. Some events in Northern Ireland are still scheduled to go ahead, but may be cancelled as the situation develops.

It is the first time the New York parade has been cancelled in its 258-year history.

The parade, honouring Irish heritage, is older than the US itself and draws tens of thousands of marchers and throngs of spectators to Manhattan’s Fifth Avenue each year.

The White House reception includes a shamrock ceremony and takes place every year ahead of St Patrick’s Day on March 17.

Taoiseach Leo Varadkar arrived in Washington DC on Wednesday – a day later than planned due to contending with Covid-19 in Ireland – where he addressed the Ireland Funds gala dinner at the National Building Museum.

Varadkar left the event without speaking to the media.

The White House said the St Patrick’s event, would not be going ahead “out of an abundance of caution”.

However Varadkar remains scheduled to visit the White House on Wednesday morning where he is expected to meet with Trump and take part in an “extended bilateral” discussion. 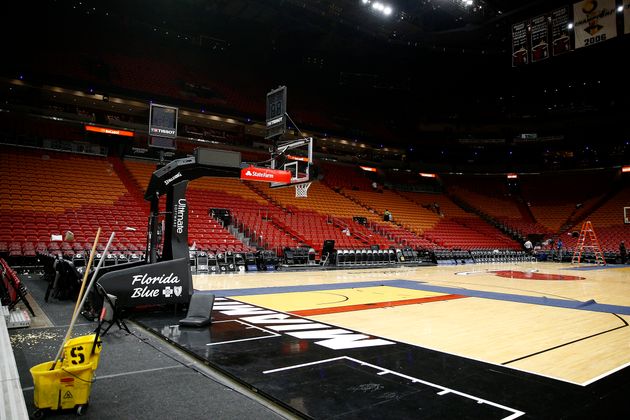 The NBA season has been suspended “until further notice” after an unnamed player from the Utah Jazz tested positive for coronavirus, with the outbreak continuing to rip through the sporting schedule.

American basketball was suspended after the league was advised of the positive test shortly before the scheduled game between the Utah Jazz and Oklahoma City Thunder on Wednesday night.

The NBA said in a statement: “The NBA is suspending game play following the conclusion of tonight’s schedule of games until further notice.

“The NBA will use this hiatus to determine next steps for moving forward in regard to the coronavirus pandemic.”

Utah said the player, who was not at the arena, had been tested as “a precautionary measure” in consultation with NBA medical staff and Oklahoma health officials.

The team said in a statement: “When it was determined that the individual would be tested, we immediately informed the league office.

“The health and safety of our players, our organisation, those throughout our league, and all those potentially impacted by this situation are paramount in our discussions.”

It said the player was “currently in the care of health officials in Oklahoma City”. 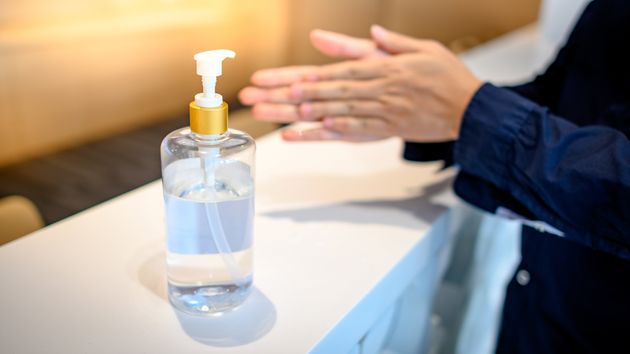 Panic-buying has now spread beyond the shelves of supermarkets and into the school corridors, with one teenager from Leeds sent home after selling hand sanitiser to fellow pupils for 50p a go.

His mother Jenny Tompkins, from Leeds, said it had been hard to discipline her son – who attends Dixons Unity Academy – when his “dad called to say he was a legend”, BBC News reported.

Tompkins said her son had arrived home “with a big grin on his face”, and planned to spend his £9 earnings on a kebab and a multipack of Doritos.