Coronavirus Outbreak: Could What's Happening In Italy Occur In The UK?

A soaring number of coronavirus deaths has seen Italy forced into lockdown – and some scientists fear the trajectory of the virus could put the UK in a similar position within a fortnight.

With more than 10,000 coronavirus infections and 631 deaths among its ageing population, Italy’s 62m people have been largely told to stay at home. Although some shops, cafes and restaurants remain open, police around the country are enforcing rules that customers stay a metre apart from each other and certain businesses close by 6pm.

Meanwhile, as of Wednesday, a total of 27,476 people in the UK had been tested for Covid-19, with 460 of those testing positive by Wednesday afternoon. Eight patients infected with the virus have died. The rise is the largest day-on-day increase since the outbreak began. 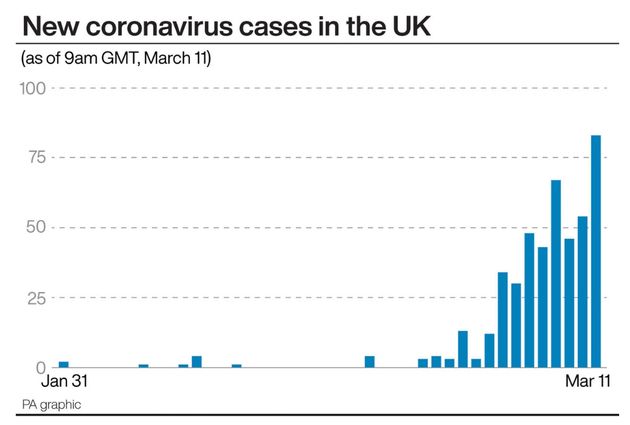 Francois Balloux, professor of computational systems biology and director of the University College London Genetics Institute, told HuffPost UK he believes the “doubling effect” of the virus could see the UK recording similar figures to Italy within weeks owing to both new cases and transmissions.

He said: “The doubling time is every five days or so. Assuming that we have around 400 cases now, in five days we’d have 800, then in two weeks that would be roughly 3,000 cases. With a bit more testing we might be closer to 10,000. Using this calculation it would take a bit more than two weeks to get to 10,000 cases but if nothing changes, then this is the kind of dynamic that could see us reach that point.”

Mark Handley, professor of networked systems and roboticist at the same university has been tracking the outbreak and like Professor Balloux, believes the growth curve could put the UK in a similar situation as Italy within a fortnight.

Here’s the coronavirus data, overlayed with the dates offset by the amounts shown. One of these countries is not like the rest. Everyone else will be Italy in 9-14 days time. pic.twitter.com/VESY54X1gP

This version includes South Korea. They were on the same growth curve til 7 days ago – ahead of Italy. The measures they adopted then (subject to the lead time in measurements) seem effective – still exponential growth, but similar doubling period to Japan now. pic.twitter.com/CKvgABlQXJ

Professor Balloux points out that spikes in official disease figures often occur when testing becomes more prevalent and do not necessarily indicate that the situation is getting worse, but he does warn that the UK should brace itself for much higher figures – at least in the short term.

One silver lining for the UK, however, is the time of year – and how prepared it is.

Warmer months make it harder for the virus to transmit, so the fact we are now in spring and approaching summer is an advantage that Italy did not have, where the virus is believed to have gone undetected since late January.

Some experts have attributed Italy’s high death rate to the fact that the country has the world’s oldest population after Japan, with most of those who have died being elderly and all having previous health issues.

Large family units living together may have seen high numbers of the elderly affected due to their exposure to younger, more mobile groups of relatives, who may have been unaware they were carrying the disease.

Italians are also known to have a more tactile culture than in the UK. Professor Marina Della Giusta from the department of economics at the University of Reading told the PA news agency: “The interpersonal physical space in Italy is a lot shorter than it is in the UK.

“Their habit is to kiss each other when you say hello. There is higher physical contact anyway around the Mediterranean between people.”

By contrast, the British public has been getting told to limit physical contact since early February.

Professor Balloux believes the UK outbreak “will calm down and possibly even peter out in the summer”.

Another positive thing is, as more people are getting exposed, they build up immunity and they cannot be re-infected, so at some point that will reduce transmission. At the moment every person who is infected infects on average another two people, then you have this kind of doubling.

“But at some point, when you have a proportion of the population that has been exposed and they are immune, essentially out of these two people who have been exposed, if one already had it, then it’s only one transmission and the epidemic doesn’t go up any more.”

However, this does not mean that the virus couldn’t restart in the winter.

UPDATE on coronavirus (#COVID19) testing in the UK:

6 patients who tested positive for coronavirus have sadly died.

The digital dashboard will be updated later today. pic.twitter.com/u7CQMWb6wn

Another advantage the UK has over Italy is its ability to prepare. In Italy, the first person to test positive for the virus who had not been to China was confirmed to have it on February 21. By that stage the 38-year-old man had already infected his wife and several doctors, nurses and patients at the hospital where he had attended with flu-like symptoms three days earlier.

Ministers say the UK remains in the “containment” phase of tackling the spread of coronavirus and that formally moving to the next, “delay”, stage would mean social distancing measures – such as restricting public gatherings and more widespread advice to stay at home – could yet be brought in.

Professor Balloux said: “The situation has been so terrible in Italy because the hospitals were completely overwhelmed.”

He believes that many of those infected with coronavirus would have survived if the hospitals had been less overwhelmed and more prepared.

On Wednesday, Rishi Sunak told MPs dealing with coronavirus was the “key challenge” facing the country, as he unveiled a series of measures to tackle the outbreak. 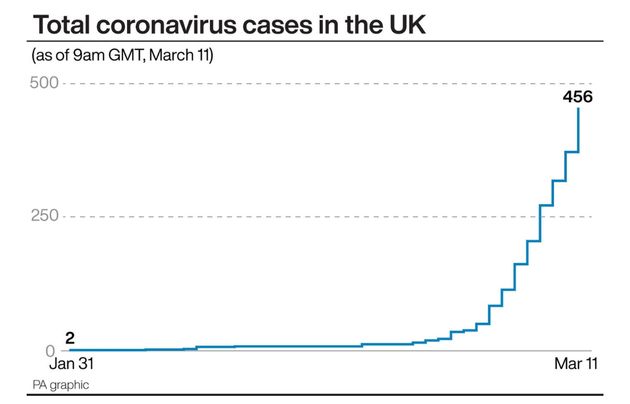 The chancellor used his Budget speech to commit £30bn to a “temporary, timely and targeted” response.

He said he was setting aside a £5bn emergency response fund to support the NHS and other public services, adding that he “will go further if necessary”.

“Whatever it needs, whatever it costs, we stand behind our NHS,” the chancellor said.

Professor Balloux said: “I think the real challenge and most important aspect of it all for the UK is actually to make sure that there is healthcare capacity and that people get treated. I think to some extent that the number of cases is far less important than the number of severe cases and indeed fatal cases.

“The main reason is spare healthcare capacity – how many free beds you have is extremely seasonal. The best time of year to be ill, if you want, is end of spring, beginning of summer, before the heatwaves.”

While there’s no doubt that lockdown strategies like Italy’s and China’s can help contain an epidemic, albeit temporarily, Professor Balloux doesn’t think it’s likely the UK will follow suit.

He said: “That’s definitely not what the government is planning at this stage.

“Now, there’s no doubt it can work – it will reduce transmission and number of cases. That’s what they’ve done in Wuhan, Hubei province, where the outbreak and it’s been reasonably successful.

“But one of the bigger problems is that you can’t force a global lockdown. Sure, locally you can slow the epidemic, but some countries can’t do it and some countries won’t do it. And if you are able to bring down the number of cases you have eventually got to reopen your borders – after all, how long can you see the population of the UK with closed borders?

“And then the other cases come in. They’ve seen that in China – they’ve just lifted slightly the lockdown in Hubei province and they just had today I think 10 imported cases, just in one day. And China is not the place where most people go on holiday.”

The costs of a lockdown can also be prohibitive to both the economy and the health of those who rely on it.

He said: “There are many, many people who have many, many conditions which are not coronavirus who might suffer a lot if the economy really takes a major hit, such as people who can’t get out of their house. How do people with HIV get their drugs? There are many examples like this.”

Professor John Edmunds from the London School of Hygiene and Tropical Medicine also believes any country-wide lockdown will probably only have a short-term impact and be largely unsustainable.

“If they can’t be sustained for the long term, all they are likely to do is delay the epidemic for a while,” he said.