Birth Diaries: 'I Nearly Broke The Midwife's Fingers When She Examined Me'

I headed into hospital shortly after lunchtime the next day and was induced around 3pm. It was a pessary induction, which I found really painful, but it wasn’t long before things kickstarted. By 5pm, I could feel consistent contractions; I was told I needed to stay on monitors for two hours, though, for the doctors to see they were consistent.

The pain was so bad I kept having to ask for pain relief, but only managed to get paracetamol. A few hours later I was offered codeine. The pain was still unbearable. My mum got pretty forceful with the midwife who agreed to examine me. Thankfully, I was 5cm, and ready for the delivery ward.

From that point on, it went badly.

During an examination, I started bleeding heavily. Whenever I went to the loo, there was so much blood. I was on the bed at one point and thought my waters had broken, that much liquid gushed out! It was the only day after, I realised it was blood. The midwife was really lovely to me and kept me reassured – but I struggled with having five different midwives in the space of 12 hours. It was hard to build up a relationship.

My contractions were coming on strong by now. I had gas and air to deal with the pain and I was losing a lot of blood. I remember a registrar coming and talking about an emergency c-section, because of the amount I was losing. I was kept in the dark about it, though.

That was to keep my mind at ease, I think. I could tell by my mum and partner’s faces that it didn’t look good, but no one wanted to say how bad it was. It was only after, they admitted it. At the time, i didn’t understand what was going on.

Around 11pm, they tried to break my waters. I was exhausted and the midwife struggled to do it because I was in so much pain – she said I nearly broke her fingers while she was trying to examine me! 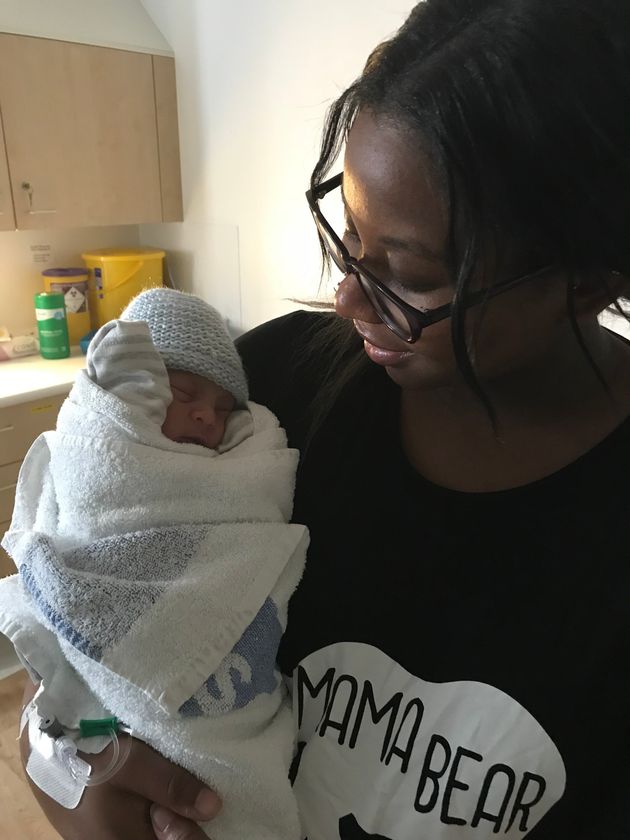 My waters actually went around 12.30am, and soon my contractions were one on top of another. I was screaming down the room in pain. I wanted more pain relief, but it was too late for an epidural.

He was born by 2.15am – that bit happened quickly. My son was crowning and they kept telling me to slow down but I couldn’t. He came out with his fists either side of his head, so I tore really horribly and had to have stitches, which was horrific.

Afterwards, when I finally got to hold him, it was wonderful though. He was 5 pounds 12, so not as small as they’d thought. I was exhausted, hadn’t slept for hours, and had to stay over in hospital without my partner and mum. But it was finally over.

Always use the people around you – use any help and support you can.