London is only 90 minutes away by plane ― two hours if you factor in the time it will take me to get to the airport ― but after watching the results roll in for the U.K. election last week, it has never felt so far away.

In March of this year, mere days before the initial Brexit deadline, I turned up in Copenhagen and, using my British passport and the freedom of movement in Europe that comes with it (for now), locked down a Danish social security number in a desperate attempt to retain a few of the rights afforded to EU nationals. I had worked in London for four years prior in a landscape that grew increasingly bleak, but I’d always assumed I would live abroad for a bit. It seemed the time was now, as Brexit forced my hand.

Living in London, my quality of life was constantly disrupted by a working culture that favors long hours and little pay. I was concerned that after four years of working nonstop in communications roles ― which included a six-month period of working seven days a week ― I had little to show for it. My life seemed as precarious as the day I graduated from university; my career was a tightrope walk between success and failure. I was unable to save anything due to stagnant pay, and I was constantly at the mercy of largely unregulated landlords.

Opportunities were dwindling, and I feared my fledgling career couldn’t weather a Brexit storm, so I packed a bag for Copenhagen. With its commitment to sustainability, hard-won flexible working hours and cycle lanes aplenty, it seemed like a happy-making place. As it turns out, I wasn’t alone.

A study conducted earlier this year by the Oxford in Berlin group and the Berlin Social Science Centre predicted that 2019 would see 84,000 Britons relocate to European countries, a drastic increase compared to the 59,000 who moved in 2008. Concerns around Brexit and a desire to hold on to European identity are regularly cited as reasons for moving.

The implications of this are yet to be fully understood, but during my time in Copenhagen, I’ve met numerous Brits in similar positions ― most of them chasing a sustainable career in creative fields and looking to improve their own quality of life, while fearing for those less fortunate at home. Britain should be concerned by the way it is haemorrhaging young talent, with the most recent election result signalling the death knell for many of us ever returning.

This election presented a stark choice: Choose between a fair society that supports the vulnerable, or continue in the same way as the past nine years. Regrettably, the country voted to keep things as they are — and, I fear, make them even worse.

This election presented a stark choice: Choose between a fair society that supports the vulnerable, or continue in the same way as the past nine years. Regrettably, the country voted to keep things as they are ― and, I fear, make them even worse.

This wasn’t just a slim majority, or a desperate bandying together of parties in a frenzied power grab. This was a whopping great defeat of all the ideals I hold dear and thought were shared by at least 48% of my country.

It’s a large blue flag planted slap bang in the middle of London that tells Europe, “Keep your fancy cheeses and responsible labor laws, we’ve got sovereignty,” lets immigrants know they are far from welcome, and sends a 3 a.m. “Hey, you up? xx” text to Donald Trump.

This is the first election where I won’t have to live with the immediate consequences ― I woke up the next day to the knowledge that my access to free health care would go unchallenged because I live in a country that acknowledges free-at-the-point-of-access is a fundamental right, but the distance doesn’t make the pain any less. I worry deeply about family and friends trapped on an island without genuine governmental support. I worry about the implications of this vote in a world increasingly polarised and at risk of populism. And I worry about minorities every time I read a headline about a spike in hate crimes.

This wasn’t just a statement about getting Brexit done. It was a fundamental change and realignment of British politics and political identity. Unfortunately, the country has shifted in a way that I do not recognise, and now returning home feels like a political act ― like moving back would be an alignment of my values with those so clearly demonstrated by the One Nation Tory party ― views that are, quite frankly, intolerant, promote inequality and jeopardise the well-being of many.

Aside from the obvious fears that I would be returning to a depleted infrastructure that only the incredibly wealthy can benefit from, I’m now left with a feeling that my home no longer exists. Physically, yes, my country has not been decimated by war and I cannot imagine the turmoil of those displaced by genocide, dictatorships or even climate change. But emotionally, the home I have tied my identity to seems to be a childhood memory. The tolerant, kind, sometimes stoic but always-ready-with-a-cup-of-tea home I’d grown up with: the Britain I see on “The Great British Bake Off” that makes my heart happy. It feels shattered now, embittered by years of austerity and with no critical awareness of how it’s been manipulated. 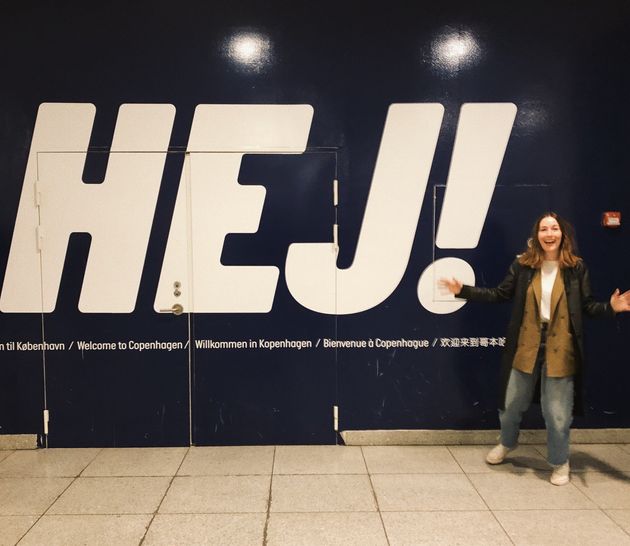 I feel like I’m leaving behind a bad relationship with an ex. I’ll make the required niceties if I’m asked about them, say I’ll always care for them and ask after them at parties with mutual friends, but really, I’m ashamed to be associated with them. And I’m worried it says something about me and my judgment.

It saddens me to be so far away from the country where I spent my formative years, to which I owe my sense of humor, my cultural references and my tolerance of lager, in search of a new home ― one where, for all of its advantages and benefits, I have felt homesick, have longed for a kindly old-age pensioner to call me “duck” in passing, and have cried during heat waves when I so desperately wanted to be in a British beer garden.

I had the luxury of choosing to move to a European capital and, providing the Danish government keeps its promise of allowing British citizens to keep the rights they entered with, I’ll have the luxury of remaining after Brexit.

This was never a life-or-death situation for me, which I will never take for granted. But knowing that the general public voted overwhelmingly for something that could be life or death for those more vulnerable, and caused me and many others to leave in the first place ― including cuts to the arts, privatisation of the National Health Service, austerity disproportionately affecting women, zero-hour contracts and a general lack of power for employees, uncontrolled rents and stagnant pay, loss of freedom of movement ― sure makes it a bitter pill to swallow.

A lot of people feel robbed by this election. The feeling of despondency after such a surprising result, albeit a shock amplified by the echo chamber, is hard to shake. Everyone who saw the potential for change for the better and hope in this election will feel like they’ve lost a bit of their home, but for Britons abroad who don’t get to be a part of the eventual healing process, this loss feels extreme.

The small acts of community and strength that I’m sure will be aplenty in the following days won’t reach Copenhagen. I won’t be privy to the moments of kindness on the tube or in a pub somewhere in Hackney. Instead, my understanding will be formed the way the rest of the world’s is: through the news. So far there has been coverage of protests, but there have also been reports of British Muslims preparing to leave in wake of Boris Johnson’s victory, and an attack on a Muslim member of London Underground staff by a man calling her a “dirty fucking Muslim c**t” ― all within 24 hours of the election results rolling in.

My friends often remark how much happier I seem since moving, and I see them question themselves and the belief that it’s London or nothing. I’m proof that there’s another way, and it’s hard to keep burying your head in the sand once you realize that.

When the exit poll revealing the true extent of Labour’s failure crashed through at 11 p.m., my phone lit up with texts from desperate friends, jokingly offering to marry me in a bid to gain Danish rights. The knee-jerk reaction to a toxic government often seems to be, “Fuck this, I’m moving abroad,” but only time will tell how true it is. My family, although sad, never once questioned my decision to abandon ship and start again in Copenhagen ― they knew it was my best shot. My friends often remark how much happier I seem since moving, and I see them question themselves and the belief that it’s London or nothing. I’m proof that there’s another way, and it’s hard to keep burying your head in the sand once you realize that.

Denmark isn’t perfect. It has its fair share of right-wing voices that would rather keep civil rights to a select few, but its most recent election demonstrated a push toward a fair and just society for all. I look forward to the day Britain finally decides to catch up.

I just don’t know how long we’re expected to wait.

A lot of hope was lost with this election, and I’m heartbroken to see so many lean into scaremongering and hatred, but I hold out hope that change will eventually come and I’ll recognise my country again. Until then, I’ll be in a bodega somewhere in Copenhagen, explaining British idioms and Scottish accents to perplexed Danes, in the hope of keeping a small slice of home with me.

Sorcha McCrory is a British content creator and writer, living in Copenhagen. She writes on topics including feminism, fashion, pop culture and current affairs, and her work has appeared on TANK, Metro, The Whoman Journal and Native. You can find her on Twitter at @Sorcha_McCrory or on Instagram at @sorchamccrory.