It wouldn’t be Christmas without bad weather and travel chaos – and sure enough, road and rail journeys are being disrupted in parts of southern and eastern England on one of the busiest travel days of the year after some areas saw nearly two inches of rain in just 36 hours.

Severe Met Office weather warnings for heavy rain indicate that water on roads will cause delays in some areas on Friday, Saturday and Sunday.

Met Office meteorologist Mark Wilson said: “There could be localised flooding. Stay in touch with the forecast, there could be delays to transport.”

There could be up to 1.2in of rain in the south on Saturday, he added. 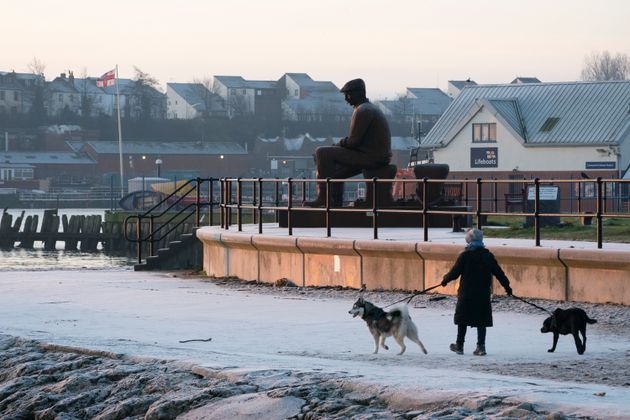 The village of Cardinham in Cornwall saw two inches of rain over 36 hours, while Bastreet Downs got 2.1in.

Devon and Cornwall Police said flooding across the force area has made “a number of roads impassable”.

They urged motorists to take extra care and avoid driving into standing water.

Norfolk and Suffolk Police said roads in both counties were affected by floodwater.

Rail passengers are being urged not to travel between Brighton and Gatwick Airport due to flooding on the tracks.

Network Rail said heavy rain has caused significant flooding on the Brighton main line, with water “completely submerging the rails in some areas”.

Engineers are on site and attempting to remove floodwater where possible.

#Colchester haven road #hythe Could cause chaos for travelling this morning. High tide was at 6am so may be gone heavy rain still falling. @Essex_Travel@yourcolchester@iHeartRadio@Colchester101@EssexPoliceUKpic.twitter.com/cilX5dgqmA

The water level is dropping, with the situation improving, however it may still take some time to clear. As soon as we have further updates we’ll let you know. pic.twitter.com/ZLwh1avEPH

#SNUpdates – Services remain heavily disrupted this morning due to flooding on the railway between Brighton and Gatwick Airport.

Our advice remains to not travel this morning until further notice.

If you do travel, you journey time will be extended by up to 120 minutes.

Update: Our engineers are on site and clearing an estimated 10 tonnes of fallen earth and trees, which means trains cannot run. We’re so sorry for the disruption today. @Se_Railway are running replacement buses between Strood and Maidstone West. pic.twitter.com/DkC5X779yp

#GXUpdates – A very limited Gatwick Express service can now run, however it can run between London Victoria and Gatwick Airport.

#GXUpdates – @NetworkRailSE track maintenance teams are currently on site dealing with the below, as they work to clear drains of debris in order to allow the water to flow away ? pic.twitter.com/W8qmwVsrxP

The operators warned that replacement buses are being “heavily disrupted due to ongoing road traffic conditions”.

No Southeastern trains were able to run between Maidstone West and Strood due to a tree on the line and a landslip.

The Environment Agency said it was monitoring the situation and the public were advised to remain vigilant.

Some 58 flood warnings – where flooding is expected – are in place for England, alongside 201 flood alerts, which warn flooding is possible.

An RAC survey suggested 4.7m leisure trips by car would be taken on Friday, as many people embark on the Christmas getaway.

Three stretches of motorway identified as having the longest expected delays were:

Motorists were advised to delay journeys on major roads until after 8pm to avoid the worst of the traffic.