Boris Johnson stands accused of rowing back on his pledge to hike the minimum wage to £10.50 as the government underlines it will only happen “provided economic conditions allow”.

Chancellor Sajid Javid unveiled in October Tory plans to raise the current National Living Wage rate of £8.21 an hour to £10.50 an hour within five years.

The party said the policy would benefit 4m low paid workers across the country, with some parts of the north set to pocket big increases during the parliament’s five-year term.

“It’s clear it’s the Conservatives who are the real party of labour. We are the workers party,” he told the conference in Manchester in October.

But guidance in Johnson’s Queen’s Speech, which sets out the party’s programme for government, leaves a get-out clause which would allow them to perform a U-turn.

The guidance reads: “The chancellor has pledged that the National Living Wage will increase, reaching two-thirds of median earnings within five years (projected to be around £10.50-an-hour in 2024), provided economic conditions allow).”

It comes after Johnson secured an 80-seat majority in last week’s general election, with the Tories demolishing Labour’s “red wall” stronghold seats in the north and midlands, which historically suffers high levels of pay inequality.

Chi Onwurah, shadow business minister and Labour MP for Newcastle Central, said: “In the very first moments of his new government Boris Johnson is already breaking promises he made during the election. 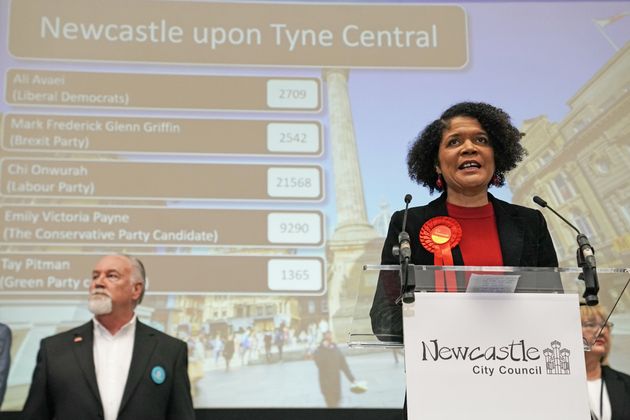 “Working people in the north have not had a pay rise since 2010 and now the prime minister is again proposing to make them pay for the failures of his economic system.

“He should guarantee decent wage for working people.”

A BBC investigation earlier this month found the North East, where the Conservatives picked up a number of seats, was the only region which had seen a real terms fall in wages since 2017.

EXC: The North East is the only part of the UK that has seen a real terms fall in wages since the last election.

After accounting for inflation, incomes before tax, in the poorest part of the country – are £195 lower in 2019 compared to 2017 @BBCLN#GE2019pic.twitter.com/eCjrZ7dWIZ

Javid’s aides claimed that the proposal would mean £4,000 a year gross increase in pay for those affected, which critics suggested would mean business being hit with a £16bn hike in wage bills.

He also promised that the increase would also apply to over-21s and not just over-25s, in order to “reward the hard work of all millennials too”.

The Queen’s Speech guidance continues: “The government plans to expand the reach of the National Living Wage, which currently applies to people over the age of 25, to those aged 21 and over within five years.

“These changes are expected to benefit around 4m low paid workers.”