Boris Johnson Must 'Bootstrap Up' The UK Economy

After the dramatic result of the election, today’s Queen’s Speech has the potential to be a massive reforming initiative on a par with those of the early Thatcher years. However, the most critical issue – how will we pay for all this – is unlikely to be the major plank of today’s speeches.

Central to this is the competitiveness of our economy, doubly so in the post-Brexit global markets. Central to that is an issue every government has failed to tackle, the productivity of the British economy.

From 1948 until 2018 both labour productivity and total productivity of the British economy grew by 2.3 per cent per annum, despite the worst economic incompetences of governments along the way. However, since the financial crash, labour productivity has flatlined at less than half a percent a year. 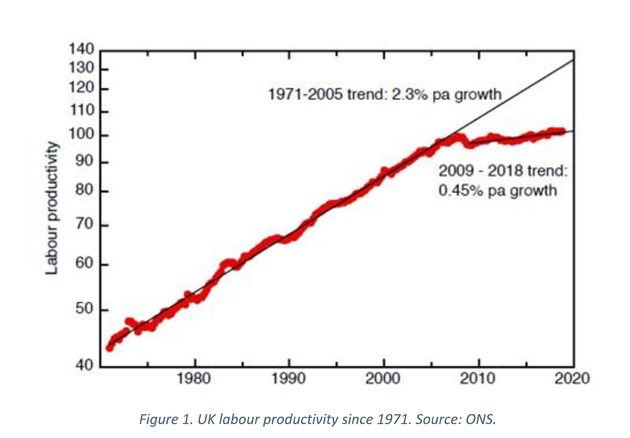 The effect of this failure is that incomes are 21 per cent lower than they otherwise would be. Growth rates are lower. Tax take is therefore lower, and as a result, deficit reduction, the millstone on every government policy, is much harder than it should be.

The question is, how do we fix it? We need to countenance doing the things we do well, but bootstrap up those things that we are doing poorly.

Some of it fits neatly with the thrust of government policy priorities anyway. A lot of capital and prospective projects have been frozen pending a Brexit resolution. We should act to release that investment, possibly with temporary capital allowances. The provinces, particularly in the North and West, have lower productivity than London and the South East. That argues for targeted policies like freeports, but also for a great deal of focus on unglamorous smaller scale infrastructure projects, that will remove local and national bottlenecks. These should be financed either by low interest rate borrowing, or better, by cancelling economically irrelevant vanity projects like HS2.

In doing this we should be careful not to take action that jeopardises our position as a good place to do business. We are still easily the greatest recipient of foreign direct investment in the EU, and third biggest in the world. We should look at some of our City rules to make this easier. At the moment we seem to have a regulatory system that burdens the honest but does little to hinder the money launderers they are supposed to stop.

Most important of all, even above encouraging higher levels of investment, are our policies on training and research. In both of these areas the government is heading in the right direction, but on research it is still too unambitious. Our target is to raise research spending to 2.4 per cent across the economy. In many ways we have much to be proud of – we have more billion-dollar tech “unicorns” than any other European country – but there is enormous scope for a great deal more.

Currently we spend proportionately less than all our European competitors, half of Japan, and a third of South Korea’s research intensity. China overtook us a decade ago, and that gap is increasing by the year.

In a nutshell, we need to double our R&D investment, and in the long-term treble it. That means a spending, tax, and regulatory environment designed to act in a coordinated way to deliver that. Innovation is the key to productivity.

Some may think that such a policy would simply pump more money in the already overheated “golden triangle” of Oxford, Cambridge and London. In practise we should explicitly direct a proportion of this resource to centres like Manchester (the home of graphene), Nottingham (the home of the MRI scan) and Edinburgh (the home of the Higgs Boson).

Most important of all, we should be reinforcing the existing successes like the Advanced Manufacturing Research Centre at Rotherham or the Warwick Manufacturing Group at Coventry. Operations like these, designed to address the traditional British weakness in turning brilliant science into manufacturing success, go right to the heart of the productivity problems.

Boris is a One Nation Tory. Today we have two industrial nations in the UK; the prosperous high productivity South East, and the poorer, lower productivity Midlands, Wales, the North of England, and Northern Ireland. Resolving or reducing this productivity disparity will help correct our overall productivity problem and reduce the equity issues in our society. That would be a pretty good achievement as an industrial One Nation policy.

David Davis is the MP for Haltemprice and Howden and former Brexit secretary.