Australia’s deputy prime minister has blasted climate change protesters in a bizarre rant, telling them to “go and do something productive” amid their demands for urgent action to tackle the country’s unprecedented bushfires.

Addressing crowds camped outside prime minister Scott Morrison’s official Sydney resident, Michael McCormack said Morrison was enjoying a “well-deserved” holiday and, in comments reported by the New Daily, urged them to: “Go and do something productive. Go and donate your time to Meals on Wheels and something like that. The fact is, the PM is not here. 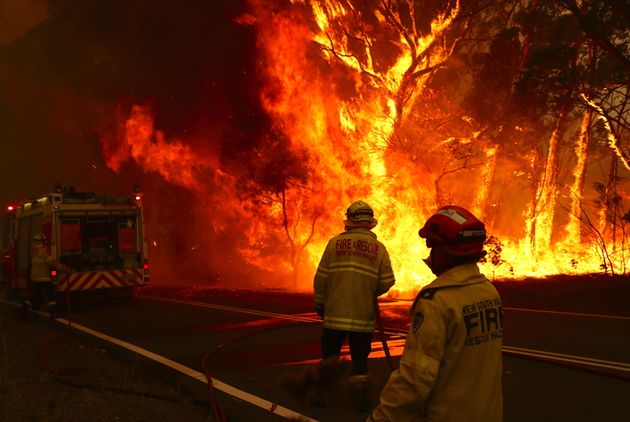 Tuesday saw the country experience its hottest day on record, with an average temperature across the country of 40.9C beating the record of 40.3C from January 7, 2013.

Meteorologist Diana Eadie said: “This hot air mass is so extensive, the preliminary figures show that yesterday was the hottest day on record in Australia, beating out the previous record from 2013, and this heat will only intensify.”

The weather bureau said temperatures in southern and central Australia may reach between eight and 16 degrees higher than normal.

While cooler weather eased fires and haze around Sydney on Wednesday, the previous day’s thick shroud of smoke triggered protests and prompted one conservative lawmaker to break with his party by directly tying recent weather to carbon emissions.

I lost my house in a bushfire and I will not sit in silence while the government does nothing and the country burns. – Fiona, Bushfire Survivor #WhereTheBloodyHellAreYou#ThisIsClimateChange#ThisIsNotNormalpic.twitter.com/dE3l2WXP3f

Brad Wilson from a nearby wildlife sanctuary packed his car with dingoes and possums and just left @SBSNews#NSWfires#NSWbushfirespic.twitter.com/Bkkh4An4Gn

“We are in the middle of the worst drought in living memory – this is the second hottest year on record,” New South Wales Environment Minister Matt Kean, from the centre-right Liberal-National coalition, told the Australian Broadcasting Corp Radio.

“Yesterday smoke was causing some of the worst air pollution in Sydney that we’ve ever seen – this is climate change.”

People had choked in Sydney on Tuesday as more than 100 fires raged across the east coast, turning the daytime sky orange, obscuring visibility and disrupting public transport services as air quality plunged.

On Wednesday, temperatures dropped by more than 10C and winds eased, improving the air quality, although it still held at levels considered hazardous.

Amid mounting public anger, Australia’s Liberal-National government defended its policies in tackling climate change and downplayed its links to the unprecedented early arrival and severity of the fires. “Certainly, climate change is a factor, there is no question, but also it is important to note that most of these fires have been caused by ‘Little Lucifers’,” deputy PM McCormack told ABC, referring to arsonists.

As police went about their move-on order at Kirribilly House, one girl was visibly frightened during police direction.

She and her father complied with the move-on order.#ClimateProtestpic.twitter.com/PJHHAs1B8n

Fiona and her family lost their home to the #bushfires. There here outside @ScottMorrisonMP‘s house to ask what he’s doing about the #climatecrisis but he’s gone on holidays. #WhereTheBloodyHellAreYou#ThisIsNotNormal#climatecrisispic.twitter.com/FYHnnigQtMhttps://t.co/MeGFMcMolb

Australia’s fires have killed at least four people since November, burnt about 2.5m acres of farmland and bush and destroyed more than 400 homes.

While police are investigating what triggered some fires, firefighters and scientists have said the bulk of the blazes have been caused by soaring temperatures and three years of drought that left bushland tinder-box dry.

PM Morrison has said his government is committed to fighting climate change, insisting Australia will meet a pledge to cut emissions by between 26% and 28% by 2030, versus 2005 levels.

Sydney is choking on bushfire haze. Our Future is On Fire. We need urgent, bold climate action. #WhereTheBloodyHellAreYou#ThisIsNotNormal#ClimateEmergency#ClimateActionNowpic.twitter.com/puU5b9YQtf

Things are kicking off outside @ScottMorrisonMP‘s house! Cmon down! 109 Kirribilli Avenue. We’ll be here awhile! #WhereTheBloodyHellAreYou#FireMorrison#MorrisonFires#ClimateCrisispic.twitter.com/v9EtkqnrEN

Where the bloody hell are you Scott Morrison protest in full swing. People from all walks of life here on the PM’s front door step demanding climate action! ✊?#WhereTheBloodyHellAreYou#ClimateEmergency#ClimateActionNowpic.twitter.com/E16PdUgeAX

But critics accuse the government of merely paying lip service to climate concerns.

The 2020 Climate Change Performance Index rated his government as a “regressive force” that has “continued to worsen performance at both national and international levels”.

When asked to comment on the report during a press conference, Morrison told News.com he “completely rejects” it, adding: “I don’t think it’s credible.”

Many carried signs, with a group of four pregnant woman holding up a banner that read, “Stop burning our babies’ future.”

“They [the government] are to blame for our largest city being poisoned and, rather than taking meaningful action, they are fast tracking new coal mines,” said Chloe Rafferty, an organiser for the Uni Students for Climate Change group holding the march.

Australia is one of the world’s largest carbon emitters per capita because of its reliance on coal-fired power plants.

In June, it approved a new coal mine in Queensland state by India’s Adani Enterprises that is expected to produce 8m to 10m tonnes of thermal coal a year.