Donald Trump's Impeachment Is Coming. Here's What That Actually Means

Barring an actual heavenly intervention, Donald Trump will be impeached on Wednesday.

The current president will become only the third commander-in-chief to face the legal undertaking in the 243-year history of the United States.

On these shores, a general election and the omnipresent spectre of Brexit have somewhat relegated the story to a secondary concern for us Brits, so it seems timely to take stock and ask how we got here and what happens next.

OK, what happens next?

The US House of Representatives – the lower of the two houses, which has a Democratic majority – will today discuss two charges against Trump: that he abused his power and obstructed the US Congress.

A vote will be held and it will almost certainly be passed. Although Republicans will vote against impeachment, there aren’t enough of them in the House to stop it.

Tell me more about those charges

The House impeachment resolution says Trump abused the power of his office and then tried to obstruct the investigation in congress like “no other” president in history.

Trump “betrayed the nation by abusing his high office to enlist a foreign power in corrupting democratic elections”, the resolution says.

“President Trump, by such conduct, has demonstrated that he will remain a threat to national security and the constitution if allowed to remain in office.”

It is. Democrats are investigating allegations that Trump used the power of his office to pressure a foreign government – Ukraine – into discrediting his leading rival in next year’s presidential election, Joe Biden.

To do this he is accused of withholding millions of dollars of military aid to the country which is currently fighting a low-level war against Russian-backed separatists.

The impeachment inquiry was sparked by a still-anonymous intelligence official who was so worried about what Trump said in a call to Ukrainian president Volodymyr Zelenskiy, he took his concerns to the top levels of the US intelligence services.

The evidence is pretty damning – Trump has said publicly that he wanted Ukraine to announce an investigation into Biden and his son Hunter, a move that could have harmed the vice president’s 2020 campaign.

Evidence clearly indicates Trump wished to leverage nearly $400m in military aid and a coveted White House meeting in exchange for the announcement.

And to top it off, multiple high-level US government officials have testified under oath that Trump and his personal lawyer Rudy Giuliani explicitly sought a “quid pro quo” (a favour in exchange for a favour) with Ukraine.

Trump tried to prevent a number of these officials from testifying, which is what the “obstruction” charge is about.

The president directed administration officials and agencies not to comply with lawful House subpoenas for testimony and documents related to impeachment – though some did anyway, most notably US ambassador to the European Union, Gordon Sondland.

He said he spoke directly with Trump about the effort to pressure Ukraine and said other top administration officials were involved. He testified that Ukrainian officials understood they would have to announce the investigations in order to get the withheld security aid.

In an extraordinary and rambling six-page letter, the president on Tuesday smeared the impeachment process as “unconstitutional”, accusing Democrats of “perversion of justice and abuse of power” in their effort to remove him from office.

And of course, he fired out a few tweets to just ram the message home.

….They want to Impeach me (I’m not worried!), and yet they were all breaking the law in so many ways. How can they do that and yet impeach a very successful (Economy Plus) President of the United States, who has done nothing wrong? These people are Crazy!

OK, what happens next?

Let us draw your attention to this handy little chart. We are currently at Stage 3. 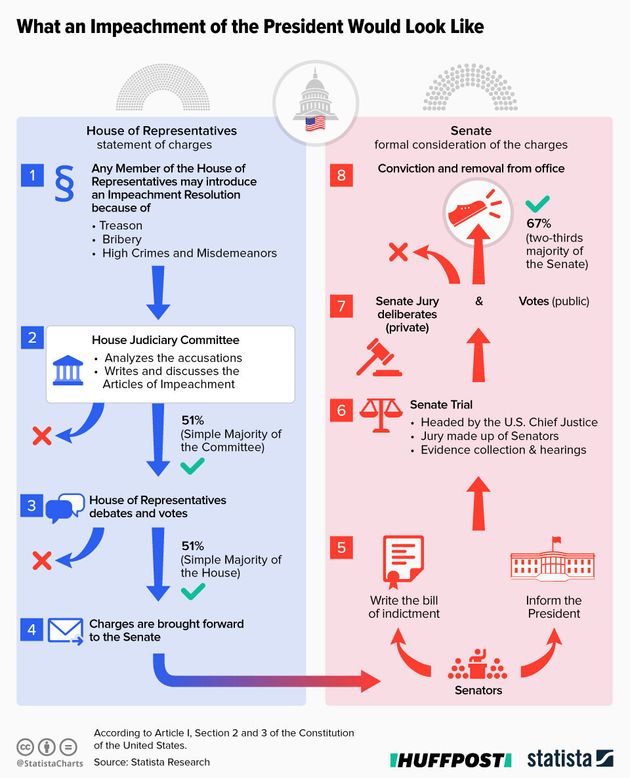 The charges will then move to the Republican-controlled Senate where an indictment will be written up.

Then Trump will face trial in the Senate.

It is very dramatic but the result is almost certainly a foregone conclusion.

Republican senators have been accused of having a “see no evil, hear no evil attitude” and are highly unlikely to convict Trump.

The chamber’s top Republican, majority leader Mitch McConnell, has rejected Democratic proposals to call further administration officials to testify and has said there is “no chance” Trump will be removed from office, Reuters reports.

Removing Trump from office would require a two-thirds majority of those present and voting in the 100-member chamber, meaning Democrats would have to persuade at least 20 Republicans to join them and end Trump‘s presidency.

It’s worth noting that a president has never been convicted in the Senate. Bill Clinton was acquitted and Richard Nixon stepped down before he could be tried.

So what’s the point?

Good question – the Democrats genuinely believe Trump has done wrong, and have portrayed impeachment as an undesirable but utterly necessary process ahead of the 2020 presidential election. 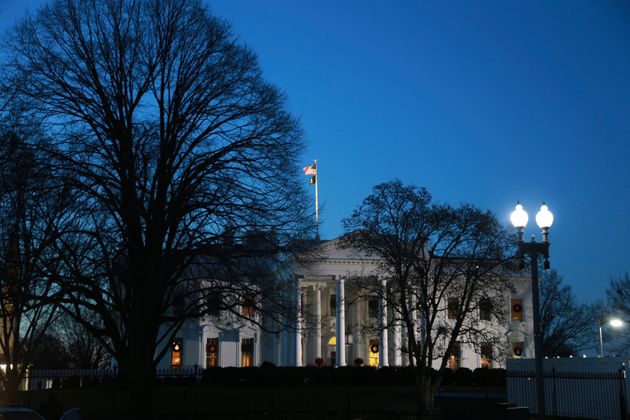 Fearful of the political blowback, Democrats were long resistant to an impeachment inquiry even after special counsel Robert Mueller outlined potential episodes of Trump obstructing justice in his report on Russian interference in the 2016 election.

There is concern among Democrats that it could backfire and affect the election chances of those standing in swing states.

What does the US public think?

With Trump seeking a second term next year, impeachment has split voters, with most Democratic voters supporting it and most Republicans opposed.

But public opinion has shifted dramatically over the last few weeks, and not in favour of the president.

The latest polling suggests a majority of people not only think he abused the office of president but also that he should be impeached.

What remains unclear is whether the months-long partisan drama will have any effect on the 2020 election beyond giving Trump reasons to boast of having beaten back Democratic efforts to remove him.