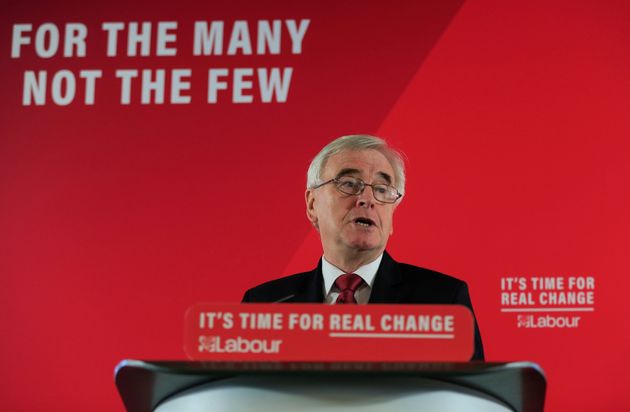 The shadow chancellor, who played a prominent role in Labour’s election campaign, said “I’ve done my bit”, and suggested a big reshuffle of Labour’s was imminent.

McDonnell added that while “Jeremy was the right leader”, it is time for the party to “move on” under new leadership.

“I’ve done my bit. We need to move on at that stage with that new leader,” he told BBC News.

A senior source close to McDonnell, who has been shadow chancellor since 2015, said: “John will stay in place until a new leader and new frontbench team is in place.”

It comes as Corbyn has indicated he will quit as the party’s leader in the early part of next year, despite facing calls to quit immediately after his party’s poor election showing.

The election saw a number of seats in the Midlands, north Wales, and north-eastern England – many of which had been considered Labour heartlands – snapped up by the Tories .

The party secured its lowest numberof seats since 1935, and some traditional Labour constituencies, such as Darlington in the north of England, now have a Conservative MP for the first time in decades – in the case of Bishop Auckland, for the first time since the seat was created.

McDonnell, who retained the Hayes and Harlington seat he has held since 1997 in Thursday’s election, added that Corbyn had been “demonised by a smear campaign against him” by the media.

“No. I didn’t back the wrong person because Jeremy was the right leader. We could have won in 2017. Things moved on. Brexit dominated everything,” he said.

Asked if Corbyn was the reason for the party’s defeat, he added: “I think there is an issue to be discussed about how the use of the social media – but also the overall media – has turned someone who I think is one of the most principled, honest, sincere, committed anti-racist politicians demonised by a smear campaign against him.”

Responding to a disastrous night for Labour, Corbyn said he would not be leading the party into another general election, and indicated that he was likely to depart in early 2020.

Positioning in the race to become the next Labour leader has already started, with ardent remainer David Lammy confirming he was considering putting his name forward.

McDonnell added that Brexit was not the only reason for Labour’s significant defeat.

“I think it wasn’t just Brexit. I think a long history of maybe 40 years of neglect and them saying to politicians ‘you never listen to us and you have allowed our community to run down in this way’.

“I am hoping that will enable us to construct a programme to address those issues, but it has got to be from the grassroots and community upwards,” he said.